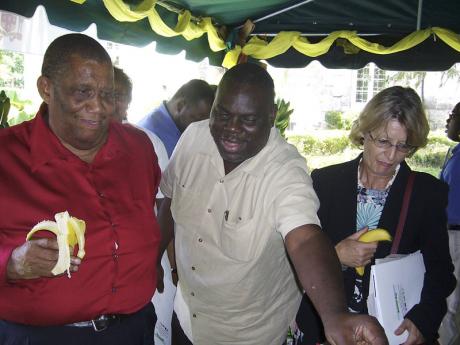 From left: Minister Roger Clarke with a peeled banana, Donovan Stanberry, permanent secretary in the ministry of agriculture and fisheries, and Helen Jenkinson, a representative from the European Union.- Photos by Gareth Davis 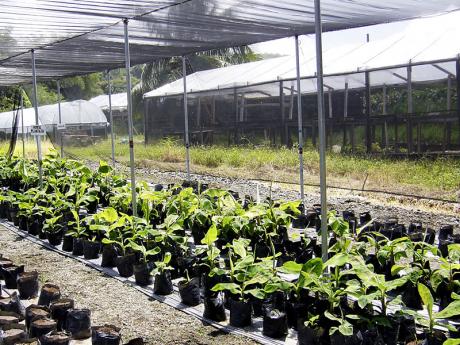 PASSLEY GARDENS, Portland:THE EUROPEAN Union (EU) has been lauded by the minister of agriculture and fisheries, Roger Clarke, for its commitment and support to Jamaica's banana industry.

The minister, who was keynote speaker at the Banana Board/European Union Banana Support Programme Banana Day celebration at the College of Agriculture, Science and Education (CASE) on Wednesday, spoke highly of the EU's contribution towards the restructuring and revival of the Banana Industry, which has been battered by a series of tropical storms in recent years.

"The part played by the EU is one of paramount importance. And it came at a time when the banana industry was under serious threat after suffering the ravages of two or three storms each year during the last six to seven years," said Clarke. "I thank the EU for its tremendous support over the years. Four billion dollars has been spent by the EU, and this is not as a result of any loan, but as grants over a period. Based on what was said by the EU representative, they are happy with what they have seen, and the fact that we are putting to good use the support that we have received," he added.

The tour party also visited a FHIA new and improved banana and plantation varieties nurseries at CASE to view a revived species of bananas, the FHIA 17 and the FHIA 20, which produces anywhere between 17 and 25 hands of the fruit.

The FHIA 17 and 20 are now grown locally in Trelawny, St Mary, and Portland for local consumption, and is not an export crop. The trunk of the FHIA bananas is thicker in size, and takes a longer period of 10 to 11 months to produce.

Earlier Helen Jenkinson, a representative of the EU delegation in Jamaica, told stakeholders that the EU is happy with what it has witnessed, and that taxpayers in Europe would be happy to know that their hard-earned tax dollars are being put to good use.

"The EU's support to the banana program is the second-biggest agriculture programme that we have supported in Jamaica. Banana growers were affected by several storms, which hit this island, forcing a suspension of banana exports," she said. "The EU then decided to step in to see what assistance could be provided to help with the revival of the domestic market, to improve the competitiveness of the industry, and to support economic diversification."