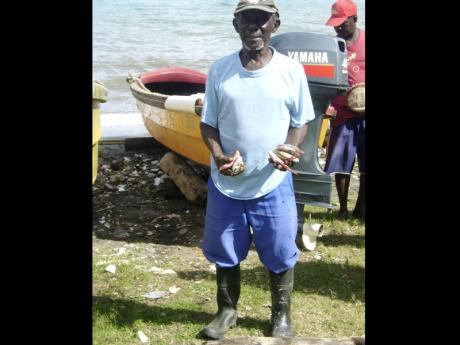 Derwin Bagnold shows Rural Express a few of the fish that his son Trevor (in background) had just brought into the fishing village at Annotto Bay, St Mary, on Friday, March 30. 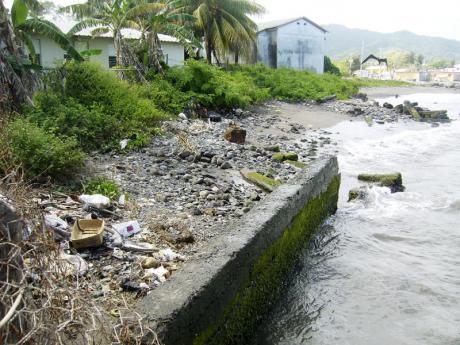 A section of the fishing village at Annotto Bay, St Mary, which some residents use as a toilet, sometimes in full view of onlookers. - Photos by Paul Walker 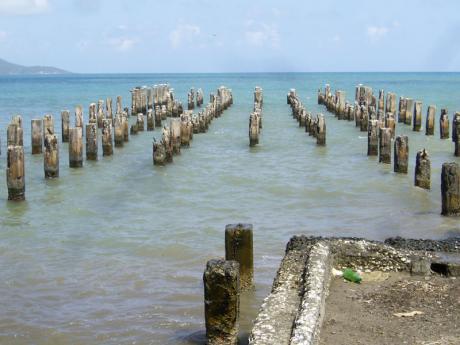 These concrete columns rising from the sea at Annotto Bay, St Mary, speaks eloquently of the decline of its once-busy fishing village. 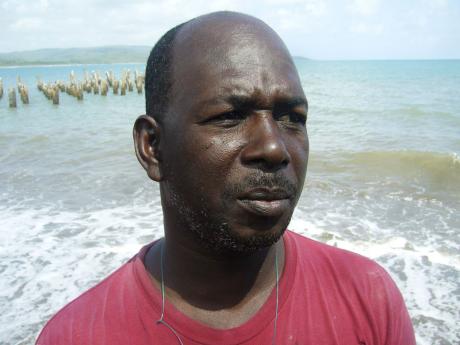 Trevor Bagnold, fishing captain and a vice-president of the fishing co-operative at Annotto Bay, St Mary, says he will not give up fishing despite the many challenges that it entails.- Photos by Paul Williams
1
2
3
4

ANNOTTO BAY, St Mary:TREVOR BAGNOLD, vice-president of the Annotto Bay Fishing Co-operative, tells Rural Express about the challenges that the few remaining active fishermen are facing. As he spilled his guts, his elderly associate scaled and gutted some of the fish, including a lionfish, from their own catch. But the story of what was happening at certain sections of the beach was more stomach-turning, and alarming, than the possibility of being pierced by one of the lionfish's sharp spikes.

A man called Desmond, who lives near the waterfront, was at his wits' end because he can't get people who use a section of the beach near his house to stop using it as a toilet. Bagnold is equally upset by the practice, which is carried out in other sections of the village, more so because after several complaints to relevant authorities, nothing has been done about this unsanitary situation.

It was more mind-boggling when a man on a bicycle said people would even leave their own yards to go produce on the beach. Why? "Because people just love to spon de beach," he answered emphatically, and away he rode, with Desmond walking with a plastic bucket behind him. They were off to sell fish, leaving Bagnold to continue the litany of woes that fishermen in the village face.

The inability to buy and maintain vessels; the high cost of engines, fuel, and fish pot mesh, and other gear; theft of fish pots; expensive fishing licences; threats of arrest and prosecution from the coast guard for unlicensed operators; and the absence of loan facilities are some of the reasons for the decline in fishing activities in the village, which used to be a place of heavy industry

Rust-stained concrete columns, sentinels of a once-busy pier, rise from the strong waves in one section. Permanent remnants of yesteryear they are, saying Annotto Bay was once a thriving port. Now, there's hardly a beach. Assorted rocks, tree trunks, and manmade refuse have reclaimed most of the sandy areas. Simply put, "We don't have any beach," Bagnold said, "And a lot a time when we meet with relevant authorities, we sit down and tell them the problems we are having, well, (nobody) pay us any mind. That is one of the biggest problems."

Yet, there is intervention from Food For The Poor. In a quid pro quo programme, it donates boats and engines to fishermen who can't afford them. Recipients are expected to make a monthly contribution from their earnings to the programme. Part of this money is to be spent on helping to take care of indigents in the area. Bagnold is in charge of this aspect of the programme. The formula works for some, but for others it doesn't. And in some cases, Food For The Poor had to reclaim its engines.

The few empty boats resting on the sands on March 30 at Annotto Bay Fishing Village says it all. Nothing is really going on, except for the constant fluttering. The "portugee" is now long dead; it had become someone's dinner. But the fishing village is still there - struggling. How long can it hold on for?

As long as it's possible for Bagnold, who is especially frustrated by the theft of his fish pots. "It get mi discouraged, but it needless mi stop, for if mi stop fishing, mi affi come a beach come siddung, and mi have a family to take care of, so mi can't afford that," said the independent fisherman of 30 years, who was born the year when Jamaican gained Independence.