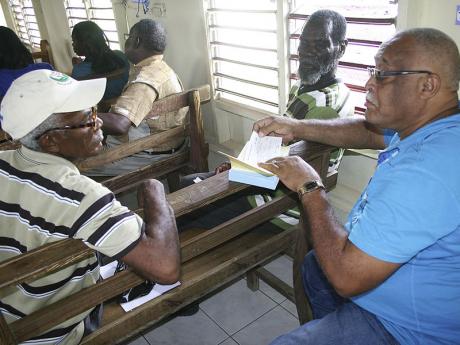 Farmer Anthony Caballeros (right) seems to be studying the agricultural receipt book as Keith Oliver (left) and Johnny Brown, president of the Bodles Farmers' Association, wait their turn to check it out. - see full caption at the end of story.

BUSHY PARK, St Catherine:COME NEXT Thursday, April 12, all police stations across the island will be open between the hours of 10 o'clock in the morning until four in the afternoon to facilitate the registration of farmers. During this time, a staff member of the Rural Agricultural Development Authority (RADA) will be on hand. The process, which will be repeated the following Wednesday, April 18, is in keeping with recent assurances from Commissioner of Police Owen Ellington that the Jamaica Constabulary Force and its auxiliaries will be ramping up their support for the national praedial larceny prevention drive.

Making the disclosure at an emergency meeting of the Bushy Park Community Development Committee on Tuesday, Praedial Larceny Prevention Coordinator Reginald Grant also had news for farmers who might miss those dates. He said that thereafter, farmers could visit any police station and advise the policemen and women of their intention to be registered.

He told the meeting: "This policeman or woman will have a responsibility to you to find out from RADA when they can come to that police station and register you."

After the verification process, which involves a RADA extension officer visiting the farm to check the information provided during registration, farmers will be able to pick up their identification cards at the police stations where they registered. In order to be registered, farmers need a proper identification card and a tax registration number and will have to provide relevant information, including size and location of their farm, as well as the type of crop to be cultivated, or livestock to be reared.

A former assistant commissioner of police, Grant told the farmers that if they were unable to identify a venue for their meetings, they could approach the divisional commander for the area and request the use of a police station in the area for this purpose.

"He is supposed to facilitate the process whereby you can go to the police station and have your farmers' meeting with police security. The commissioner say him can't turn you away because he has to give that permission," he told the meeting at the Bushy Park Seventh-day Adventist Church, St Catherine.

The praedial larceny prevention coordinator explained that the national multi-agency partnership had clearly defined roles for each member, with the Jamaica Agricultural Society, which is responsible for sale and distribution, as well as RADA being most visible. However, parish councils and the Kingston and St Andrew Corporation have key roles to play. The parish councils, through the local boards of health, are responsible for issuing butchers' licences, while the Ministry of Health, through the public health department, is mandated to ensure that all meat sold locally is fit for human consumption.

Farmer Anthony Caballeros (right) seems to be studying the agricultural
receipt book as Keith Oliver (left) and Johnny Brown, president of the
Bodles Farmers' Association, wait their turn to check it out. They were
attending a recent emergency meeting of the Bushy Park Community
Development Committee held at the Bushy Park Seventh-day Adventist
Church, St Catherine, where most of the farmers were seeing a receipt
book for the first time. The book is being promoted as a critical
element of the fight against praedial larceny, which is estimated to
cost Jamaican farmers some $6 billion each year. Farmers are required by
law to issue a receipt for all agricultural produce sold, and failure
to do so could attract a maximum penalty of $250,000, or 12 months in
prison, or both, upon conviction. - Photos by Christopher Serju