'Give small farmers, youth a chance' 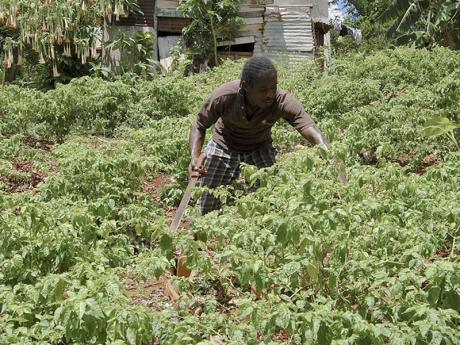 Marvin Blackwood in his pepper field.- PHOTOS BY DAVE LINDO 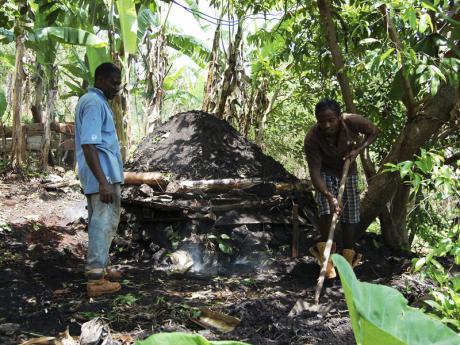 GREY GROUND, Manchester:THE COMMUNITY of Grey Ground in Manchester is viewed as a hotspot for crime in the parish. Outsiders are sometimes scared of venturing into the community because of its reputation.

However, Marvin Blackwood, a product of Grey Ground, is showing that despite the negatives, positive things are happening in the community.

Blackwood was born and raised in Grey Ground and went to school in the parish. After graduation, he took up the trade of construction worker, which took him across Jamaica.

man of many professions

Blackwood continued to do construction work, but also tried his hand at farming, which he does with his long-time friend, Lenstord Radlein.

"There is nothing on a building that I cannot do, but in Jamaica, the construction thing is not on a level that you can consistently make a living," Blackwood explained. "You need something to back that up, so I do anything I can make an honest living from, including farming. Sometimes we even burn coal ... things like that."

The two friends plant cash crops such as pak choi, callaloo, pepper, tomato, along with yam, and other ground provisions.

"In times like this, you can't make the things happening around you get you down. You have to be on top of the time ... you can't look at the negative things. You have to go the positive side to get what you want," Blackwood said.

"We try to encourage the youths to do some positive things. We always try to teach the youths trade when we get work. Some of them on the streets now making money for themselves. Even if a man goes the wrong way, a little encouragement and guidance can put him on the right track."

He added: "The Government need to do something more for the youths of the country. A lot of them not investing in the youths. There is no job out there, so sometimes some of them, after leaving school, don't have anything to do. We need to create jobs for them."

Blackwood said one of the major setbacks for them is lack of land to do their farming. "They don't want to give us the land or lease us. They prefer to let it grow up in woodland. So, yes, they say we should do farming, but they not helping to provide the platform where we can deal with it in a bigger way."

Blackwood continued: "Things that we can produce here, they are importing, and Jamaica's food is the best. Sometimes, it's the low-quality food we get from overseas. If they place emphasis on the small farmers and give them that push, the agriculture sector would be better off, and as a result, the economy of the country."