On a farm, hard work pays off 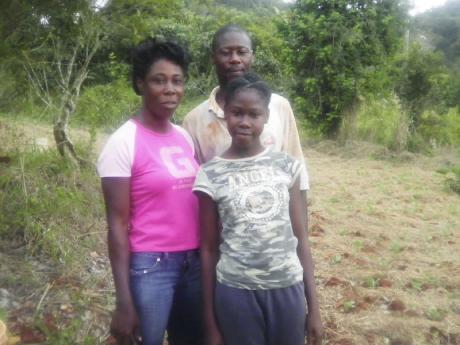 Neville Blake, his common-law wife, Angelita Goffe, and daughter Maria Blake took a break from the farm to pose for the camera.- PHOTO BY NEDBURN THAFFE

NEWPORT, Manchester:ON A Wednesday afternoon in Newport, Manchester, the sun is at its lowest and Neville Blake is out on his farmland carefully tending to his plot of cabbage and tomatoes.

The vegetables are in their early stages of development and now that the community is experiencing a period of drought, keeping the crops alive is a challenge. Thanks to his common-law wife Angelita Goffe and his teenage daughter Maria, the fight to keep the crops alive is not too daunting.

Angelita admits that helping Blake on the farm is hard work, but applying teamwork on the farm is something she enjoys doing with her common-law husband and daughter.

Until the rain comes, it's a daily ritual for the couple who, most times, have to take on the task without the help of their daughter.

"We have to water everyday, from the week start until today, we have been watering. No matter how much you put at the root, it still a dry up, so we have to carry as much as possible."

Farming and tailoring are the two professions which allow Blake to put food on the table to feed his family. However, when it comes down to tilling the soil, his love runs deep.

"I grew up on farming. My father was a big farmer. Him used to raise cow, goat, hog ... everything. So growing up and seeing this, me just develop a love for it. This is what I use to send my children to school more than anything else."

However, he admits that farming in Newport has its challenges. Finding suitable farmland is a sore point mostly, because of the heavy mining operation which was once a prominent feature in Newport during the heyday of the bauxite sector.

"Me have one little piece a rock stone (farm land), tractor can't even plough it. If you nuh plan fi use the hoe and dig it up, you can't do no farming because Alpart destroy the better part of the land them," Blake said.

But he realised that there is no challenge too large to overcome, thanks to the help of his family. "Them help me out when them can ... yes man."