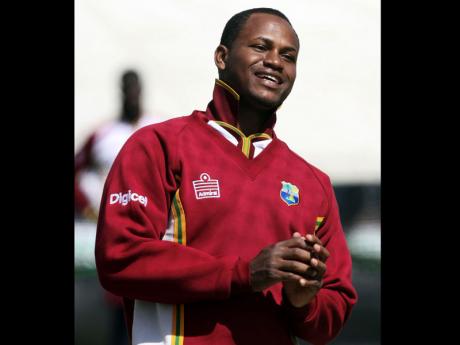 Marlon Samuels ... made four and took one wicket for Pune.- File 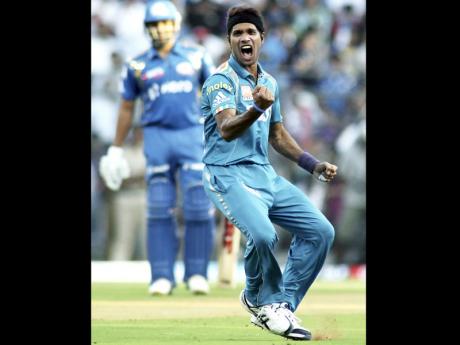 Rahane batted virtually through the innings as Rajasthan notched up an intimidating 191-4 in 20 overs. The former champion then restricted Punjab to 160-9 in a one-sided game at the Sawai Man Singh Stadium in Jaipur.

Earlier in the day, Dinda produced two incisive bursts as Pune restricted Champions League winner Mumbai to 100-9 after scoring a moderate 129-9 on a sporting Wankhede Stadium pitch in Mumbai.

Rahane's innings was studded with 16 fours and one six. He dominated in crucial partnerships of 77 with captain Rahul Dravid (28) for the first wicket and 75 with Australian Brad Hodge (21) for the third.

Rahane struck three consecutive fours off seam bowler Praveen Kumar and again off leg-spinner Piyush Chawla during his 66-ball knock and was bowled in the last over of the innings by Australian left-arm pace bowler James Faulkner, who led Punjab bowlers with 2-41.

Punjab showed early flourish in its reply through captain Adam Gilchrist, who scored 27 off 18 balls, but West Indian allrounder Kevon Cooper bagged 4-26 to end its hopes.

In the first game, Dinda struck twice in his first over and also applied the finishing touches.

Left-arm spinner Murali Kartik was the other bowler to impress with 2-14, which included the early wicket of South Africa's Richard Levi.

Mumbai, without former captain Sachin Tendulkar who has a hand injury, failed to get a partnership going in the face of some tight bowling.

Former India captain Sourav Ganguly, leading Pune in the absence of Yuvraj Singh who is undergoing treatment for cancer, marshalled his resources well and some early strikes gave his side the edge.

Dinda had Ambati Rayudu caught at slip by Kartik and then induced another edge to see the back of Rohit Sharma as Mumbai was up against it at 5-3 in two overs.

This was Pune's first game while Mumbai had beaten defending champion Chennai Super Kings by eight wickets in the tournament opener on Wednesday.