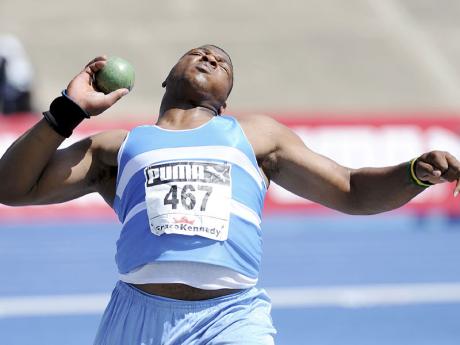 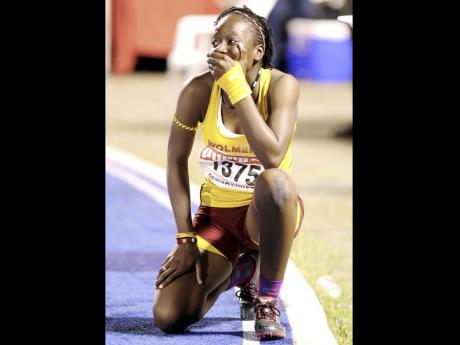 Shauna Helps of Wolmers Girls will run in the Under-17 girls' sprints.-Ricardo Makyn/Staff Photographer
1
2

Thirty Jamaicans will be in action on today's opening day of the 2012 CARIFTA Games in Bermuda, as the country looks to successfully defend its title and improve on the 66 medals, which were secured at last year's staging.

Held in Jamaica at the Montego Bay Stadium, the Jamaicans accounted for four of the eight records that were established, but were tested throughout, particularly by a spirited Bahamas team boasting talents such as sprinter Antonique Strachan, who equalled Veronica Campbell-Brown's record of 22.93 over 200m.

The Jamaicans have held the top spot since 1985 and there is little indication that this will change this time around, with a strong 70-member team assembled and ready to compete in Bermuda.

Gleneve Grange will be the first in action in the 100m hurdles Pentathlon with Calabar pair Fedrick Dacres and Ashinia Miller expected to lead the medal charge in the Under-20 boys discus final.

Dacres set the record in the Under-17 discus event in 2010 and took an even bigger step in 2011 when he won gold at the IAAF World Youth Championships in Lille, France. Dacres surprised many by winning the shot put at this year's ISSA/Grace Kennedy Boys and Girls' Athletics Championships to add to his discus title.

Demar Gayle and Sherman Kitson will line up in the Boys Under-17 shot put final while Sabina Allen will feature in the Girls Under-20 triple jump and Jehvania Whyte is expected to line up in the Under-17 girls high jump.

Christoffe Bryan, fresh from his 'Champs' victory and record, is expected to dominate the Under-17 high jump along with Javier Ogilvie.

Oraine Wint and Marleena Eubanks are entered in the Under-20 boys and girls 1500m respectively while Chantai Smith will line up in the Under-17 girls equivalent.

Jamaica's sprinting corps will also be in action in the heats as defending Under-20 boys champion Jazeel Murphy will be joined by Jevaughn Minzie, while Michael O'Hara and Xandre Blake will feature in the Under-17 ranks.

The Jamaicans will have to do without World Youth Bronze medalist Christania Williams, who was forced to pull out of the squad after picking up an injury at 'Champs', leaving Monique Spencer to carry the Jamaican flag in the Under-20 heats with Saqukine Cameron and Shauna Helps leading the charge in the Under-17 category.

The 400m heats are also set to be contested tomorrow with Lennox Williams, Jovan Francis (Under-20 boys); Devaughn Baker, Ivan Henry (Under-17 boys); Olivia James, Genekee Leith (Under-20 girls); Semoy Hemmings and Yanique McNeil (Under-17 girls) all down to compete.