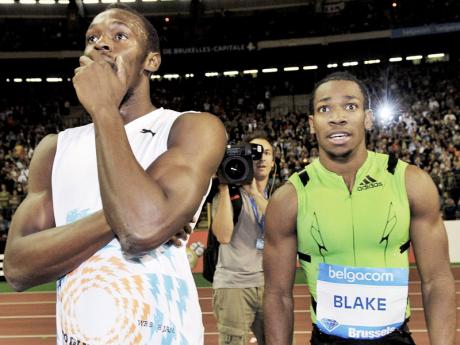 Bolt (left) is tipped for second Olympic sprint double with Blake (right), second in the 100m and third over 200m.- file

The highly respected United States magazine, Track and Field News, has predicted that Jamaica's Usain Bolt will successfully defend his 100 and 200 metres titles at the London 2012 Olympics this summer.

Bolt, like many other top athletes is yet to open his season, sparking speculation in some quarters that he might be behind in his preparations. Despite this, however, the magazine which was founded in 1948 and has dubbed itself 'The Bible of the Sport', in an article posted on its website on Thursday, picked the double world-record holder to win the 100m ahead of countryman and World champion, Yohan Blake.

Justin Gatlin, who returned to the sport in 2010 after serving a four-year ban for a doping violation is tipped to claim the bronze medal.

Blake, who ran the second fastest time in history of 19.26 to win the 200m in September at the 2011 Brussels Diamond League meet, has been tipped for bronze.

According to Richard Hymans, the man responsible for picking the medalists on the male side, Jamaica's other individual top-three finishers in the men's section will be Jermaine Gonzales in the 400m. Gonzales, who like Bolt and Blake is a member of the Racers Track Club and currently holds the national record (44.40) over 400m, is expected to take the bronze medal in the event.

American LaShawn Merritt who successfully appealed against the International Olympic Committee's rule which had barred any athlete that had received a doping suspension of more than six months from competing in the next Olympics Games is predicted to successfully defend his 400m title and win ahead of last year's World champion, Grenada's Kirani James. James beat Merritt in the Berlin final. Jamaica, holders of the men's 4x100m title, are expected to successfully again win gold ahead of the USA and Trinidad and Tobago. The United States are tipped to win the 4x400m ahead of Jamaica and Bahamas.

On the female side, which was compiled by Jonathan Berenbom, World 100m champion, American Carmelita Jeter is expected to add the Olympic crown ahead of the Jamaican duo of Veronica Campbell-Brown and defending champion Shelly-Ann Fraser-Pryce.

The magazine also predicted that Campbell-Brown will create history and win the 200m Olympic title for the third consecutive time ahead of archrivals, Allyson Felix and Jeter.

Jamaica's other individual medals are projected to come in the women's 400m hurdles where defending champion, Melaine Walker, is tipped for the bronze medal behind reigning World Champion, American Lashinda Demus and compatriot and MVP club mate Kaliese Spencer.

According to the magazine Jamaica will take silver in both the sprint and 4x400m relays behind the United States. Overall, Jamaica is expected to win 14 medals, a total which will represent the country's best ever haul at an Olympic Games.