Something to write home about 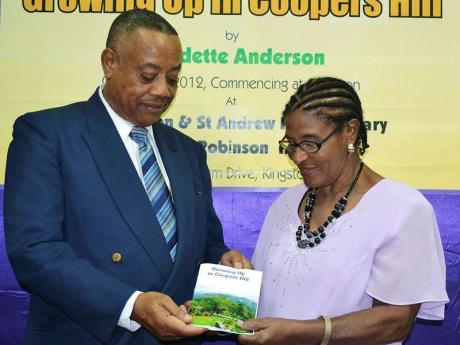 Derrick Kellier (left), minister of labour and social security, accepts a copy of 'Growing up in Coopers Hill' from Claudette Anderson at the book's launch last week Wednesday. - Contributed 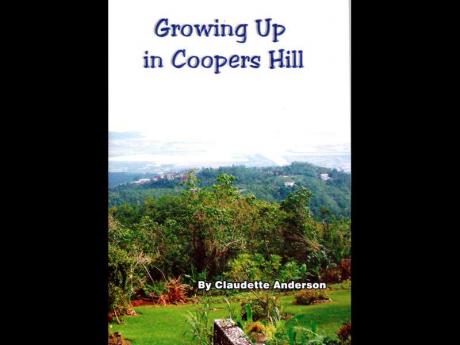 Three years ago, Veronica Carnegie started tutoring an adult writer's class, at Jamaica College in St Andrew, to provide people with an outlet for expressing their thoughts and emotions. Senior citizens were encouraged to join the class and share their stories.

"They were people who wanted to write. They had material and stories about their childhood, and I thought it would be a good idea to publish these stories," Carnegie said.

Claudette Anderson was among the first five senior citizens who registered for the class. She is also the first to be published, recently releasing her memoir titled Growing Up in Coopers Hill. The printing of the book was sponsored by Jamaica College and the launch took place last Thursday at the Kingston and St Andrew Parish Library.

The memoir written by this 69-year-old is targeted to primary school-age children. Students of Padmore Primary can perhaps best relate to the book, however, since the school is located in Coopers Hill.

The students will be able to read how their forefathers lived, and note the differences that exist between the past and contemporary society.

"The book is about my experiences as a child in my home and community of Coopers Hill. As a child there are many things that happened in our lives," Anderson told The Gleaner.

She said she thoroughly enjoyed her childhood and never wanted to grow up. These feelings inspired her to write the book.

"I always like my childhood days and didn't want to become an adult. When I realised I was going to become an adult I wasn't very happy. We got enough food as we ate what we planted. We usually shared our food as well because there was plenty to go around. Children used to go out and play more in my day as well, we enjoyed dandy shandy, hide and seek and skipping. Now the children just go dance or stay inside and watch television," Anderson added.

Religion and education were also integral aspects of her childhood as her parents instilled morals and values through these channels.

"We attended school and worked as we had to support the household. When we weren't working, which was on a Sunday, church was compulsory. We respected church life and we had to obey the rules. School again was compulsory whether rain or shine. We had to take in our education," she added.

The writer's class is over for now, however, there are plans to resume it at the National Council for Senior Citizens in September.

"There are also manuscripts for Growing up in Morgan's Pass and other Achievements, Growing up in Cassava River and Growing Up in Logwood District (written by other writers in the class). They are always coming to me with manuscripts and seeking help," Carnegie said.