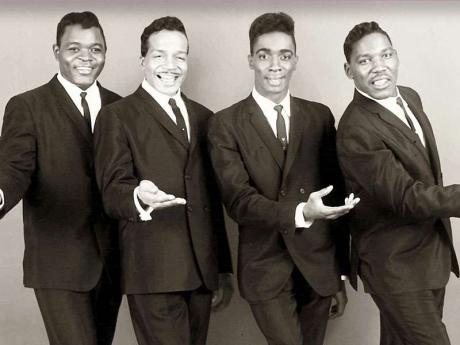 The history of rhythm and blues is filled with vocal groups such as The Flamingos, The Mongols, The Five Satins, Little Anthony and the Imperials, The Cadillacs, The Orioles, The Dells, The Coasters, The Clovers, The Crows, The Penguins, The Crests, The Spaniels, and The Shirelles, occupying the front line.

The Drifters, a quartet, was part of an even more exclusive fraternity as a group of that period which managed to carve out a place for itself in the R'n'B firmament and also define that music, not only at its inception as a national chart phenomenon in the early 1950s, but in the decade that followed.

Unlike all the other groups, extreme longevity saw it occupying two distinct phases in its lifespan. These phases abounded with complexities, contention, continuous line-up changes, and even the firing of members, which was unprecedented in the history of popular music up to then. It was high drama, to say the least.

Contrary to what many people think, The Drifters story really began in early 1953, when Clyde McPhatter, a very talented, high tenor, lead vocalist of the group, Dominos, had just quit. Atlantic Records' boss Ahmet Ertegun, upon learning of McPhatter's departure, opportunistically intercepted and signed him to his fledgling record label, with instructions to form a group of his own to record for him. McPhatter went straight ahead, laying the groundwork by hiring manager George Treadwell who masterminded the career of Sarah Vaughan before marrying her in 1947. He then recruited three gospel singers from gospel groups Jerusalem Stars and Silvertone Singers to harmonise with him. It was this very characteristic that gave the group its name, as consistently throughout the group's lifespan, members drifted in from other groups.

The group's first recording session in August of that year yielded the No. 1 R'n'B hit Money Honey. The success of this hit didn't stop the regular line-up changes and by early 1954, McPhatter, with two new members led them on a number of chart-toppers, including Irvin Berlin's White Christmas - their first crossover pop entry, Such A Night - a No. 2 R'n'B hit, and their biggest hit to date, Honey Love - a No. 1 R'n'B hit, recorded October 24, 1954.

Although McPhatter was assured a considerable amount of musical control, by the fall of 1954, he became dissatisfied with the way label boss Ertegun was handling the musical arrangements, and as a result left the group in favour of a solo career.

The drama, in terms of members drifting in and out, along with changes in lead singers, continued after McPhatter's departure. Bobby Hendricks led on the big hit, Drip Drop, while Johnny Moore, who served in two different stints led on such winners as Adorable and Ruby Baby.

McPhatter had organised The Drifters under the auspices of his own business entity, Drifters Incorporated, so that he would have a share in its earnings. His contractual arrangements with manager Treadwell, made him half-owner of the group. McPhatter, upon his departure, sold his half of the business to Treadwell in 1955, giving Treadwell complete control and ownership of the group, to the extent that he could hire and fire at will.

By late 1956, the group was becoming very dissatisfied with the conditions of employment. Long working hours on engagements with meagre salaries, was becoming a bone of contention between the members and Treadwell, and they became very unruly.

In the midst of this, members kept walking off the job.

The final straw may have come in June of 1958, when, during a run of shows at the Apollo, an inebriated Drifter made the decidedly impolitic mistake of berating the Apollo owner.

Treadwell, having fired two other members previously for similarly undisciplined behaviour, apparently ran out of patience and fired the group en bloc.

This action placed him in a very precarious position, as he had 10 months of contracts on the road to fulfil. He had to find a replacement group or face the possibility of court action.

The remedial situation embodied in the events that followed, bordered on nothing less than high drama, desperation, intrigue and the creation of a type of music that was different from anything previously heard from The Drifters.

As the story goes, George Treadwell had seen a group named The Crowns open the Apollo shows that week. He approached their manager Lover Patterson, explaining that he was dumping the existing Drifters and needed a new group to fulfil their performing obligations.

One of the Crowns, Benjamin Nelson, better known as Ben E. King, picks up the narrative, describing the metamorphosis of Crowns into Drifters.

"Treadwell approached our manager, and asked him if we'd like to become the new Drifters. We thought he was joking and put it down to a good-night drink he might have had. Then sure enough, at the end of the week, The Drifters did disband and we went downtown to replace them." Treadwell had thus neatly executed a 'coup'. He had rid himself of his 'problem', while maintaining the continuity of The Drifters name and the all-important bookings it represented.

The changes ran far deeper than just a new set of faces fronting an established name. When they walked into Coastal Studios for the first time in March 1959, they saw assembled for them a group of backing musicians whose size and instrumentation suggested anything but an R'n'B date.

It looked as though a lush pop ballad session was about to start, and in a very real sense, it was.

The group's first recording There Goes My Baby in April 1959, a landmark one, including a string section, became an instant million seller.

A string of hits in this mould followed, including Save The Last Dance For Me, the second of their four million sellers, This Magic Moment, Some Kind Of Wonderful, Upon The Roof, and the history-making double sided No. 1 hits - Under The Boardwalk and I Don't Want To Go On Without You.