Powerful music from a small studio 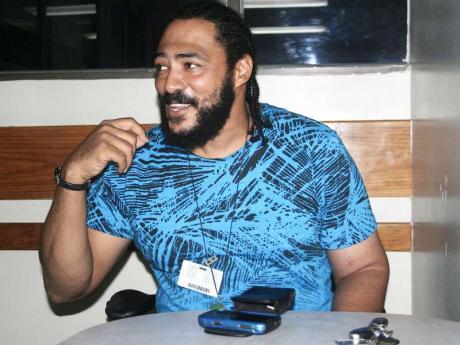 Having been involved up close with entertainment for most of his life, Owen Banton has decided to now take a hands-on approach with the aim of influencing the future of reggae music. His decision was influenced largely by the mediocrity of what today passes as music and a yearning for the quality recordings of yesteryear.

"People not putting a lot of energy and time into the music because I remember back in the day when you had to use 24 tracks, when you had to spend a lot of time in studio. People are no longer putting in that energy because they come with the Pro Tools, so you can auto tune on your voice and do a lot o' things to change up your voice.

"Everybody turn artiste now so people not putting a lot of energy and effort into it. You have a lot of people can just go inna the studio and do suppen and just put auto tune pon you voice and you become an instant hit," he charged.

"I have nothing against the dancehall and those producers that trying fi make a hit because you haffi have gimmicks in the thing, but I grow up listening to good music. I'm coming from that era, so I decided that listening to music for the past decade, the One Drop (rhythm) has been deteriorating. You nuh hear the authenticity of the real music like when you listen to a Burning Spear, Bob Marley or Peter Tosh."

Spurred by this disaffection, Banton formed the label AZA YAAD MUZIC with friends Wayne Dyer and André Davey. He explains the rationale behind the founding which was really Dyer's idea, but grounded in his expertise.

"I've been doing a lot of work with other labels over the years starting with Fifth Element records and, after leaving, I decided that bwoy full time now, producer. I started touring with them doing the back light, stage technician and then we started the production with the artistes. After leaving I started doing a lot of stage management on most of the major productions in Jamaica - Unity Splash, Richie Stephens' Take Me Away, Camp Fire, Rebel Salute, General Degree's Manchester Fiesta, Spragga Benz's Live Fest."

It was during this period while honing his skills that friends put the idea of forming a label to Banton.

"A bredren say to me, 'You been in the business all these years, why you nuh form you own label and do you own thing?' and I decided that well, I'm going to do it. AZA means powerful, so we settle fi powerful yaad music."

Inspiration for the first project on the label came while Banton listened to the late Peter Tosh, and was manifested in a cover of Where You Gonna Run done by Tony Curtis and Lutan Fyah.

Fired by the strong appeal of this effort, he stepped up the drive to resurrect the music of his youth.

"Afterwards we decided we going to work on another One Drop, which is the Pure Heart rhythm. That rhythm is getting a lot of rotation on the radio with Nesbeth's song, which is getting countless airplay. So we gonna release the Juggling now which has Chris Martin, studio artiste Kerry Ann Lewis and Lutan Fyah on it, with other artistes to be introduced on other projects."

This is in keeping with Banton's vision for righting certain wrongs in the music industry.

"We're really focusing on the label out there and letting Jamaica see what we are doing. The music that we are putting out is authentic because we make sure that whatever the artiste is doing - a love song, social commentary, whatever - that it is powerful, something people can relate to, because that is what is really lacking in our music right now."