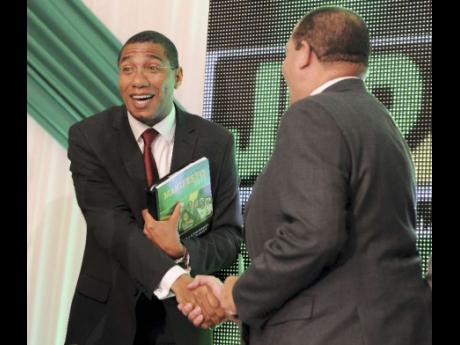 "It seems to me that Andrew Holiness … is not sufficiently charged with the mental fortitude to weather the present storm clouds howling in the JLP … I do not expect him to survive much beyond the beginning of 2013 and it is quite likely that at the JLP annual conference more sparks are likely to fly" - Mark Wignall.

NOW MARK Wignall as a political analyst has got it wrong about as often as have tent preachers on the Second Coming of Christ. But one can't deny that he has his ears to the ground and he does have impeccable grassroots contacts. With two disastrous and humiliating electoral defeats - made more pronounced and excruciating for him in light of the hopes he ignited —it is not surprising that Andrew Holness faces the prospect of a fight for his leadership of his party.

We all must not forget how unbeatable Andrew Holness seemed in those first weeks after he was tipped for the throne. There seemed to be an Andrew Holness mania all over Jamaica. In with the young, out, out with the old. It seemed the Jamaica Labour Party (JLP) had found its magic elixir, potent enough to exorcise the ghost of Bruce Golding.

A 67-year-old Portia Simpson Miller was seen as no match for this 39-year-old Great JLP Hope. Today, if the JLP had not been wiped out so badly that Chris Tufton and Bobby Montague have lost their seats (especially the former), more people would be asking not if, but when Holness would be challenged for his job. Perhaps that was his redeeming hope on December 29 - that two of his more likely contenders had been swallowed up in the People's National Party (PNP) landslide. Massa God neva give you more than you can bear!

Today, there is only one person who can credibly challenge Andrew Holness for the leadership of the JLP and that person is Audley Shaw. Audley is a jinxed man, a most unfortunate and tragic case of political misfortune and bad luck. Things were favourable for him to take over from Eddie Seaga - until the moneyed classes impelled Seaga to bring back Bruce, making offers he could not refuse. But a senior JLP insider told me last week, as we recounted Audley's miscarriages, that it was even before that that he had the opportunity to rise but did not grasp it, preferring, the insider reminded me, to be Mr Seaga's "waterboy".

In that insider's view, if Audley had challenged Seaga instead, he would have had a good chance of getting the support of the delegates.

Perhaps Audley felt that if he waited
patiently and showed loyalty, the crown would fall naturally to him.
Seaga liked Ken Baugh, but delegates might have thought Ken too nice a
guy and lacking aggressiveness and platform proficiency. Bruce came
back, with Seaga's thinking that his return would have gained him the
electoral victory in 2002, but PJ Patterson trounced him yet again,
leaving him to the wolves. So Bruce emerged leader and went on to win
the 2007 election. The rest is history. A most regrettable history for
Labourites.

And when the Labourites thought of turning the tide
of that history and it seemed that Audley would emerge - and this time
the powerful backers were eyeing him - the party got this brilliant
flash of genius to play the youth card. I remember one JLP official
telling me excitedly that it was two years before that one senior was
telling them to do just that to send the PNP into the political
wilderness.

Another told me in the height of
Andrew-mania: "Just think of it, Ian. In a short while, all the top
brass of the PNP will be wiped out. Gone. In one sweep. Bobby, K.D.,
A.J., Omar, Roger, Peter and Portia herself. You are talking about the
death of the PNP." It was a death that was greatly exaggerated. Today
that ageist canard seems a distant memory.

Audley was
considered too old to run. That morning at the Terra Nova when he and
other possible contenders were all paraded before the cameras to give
their blessings to the new Prince, I saw the pain etched on Audley's
face. But no challenge had a chance of succeeding in that euphoria over
Andrew.

Now that this myth about age has been properly
dispensed with (No, Mike Henry, don't take push to extremes now!),
Audley Shaw has become relevant again. In my own view, there is no need
for a change of leader in the JLP.

The reasons for the
massive rejection of the JLP don't reside with Andrew Holness. The JLP
must not fool itself. Andrew Holness has many of the qualities which
would make him a good prime minister and which makes him a good leader
of the JLP. And he has time on his hands. In 10 years time he will still
be young - for what that is worth. But that is precisely an issue which
someone like Audley could exploit: Because Andrew is so young, he might
not have the sense of urgency and the thirst for power that an older
person would have. The JLP wants to know it has a leader who is eager to
get back into Jamaica House and who will not keep Laborites out in the
wilderness too long - and can't afford to.

So while my personal view is that Andrew
should remain, Audley's assets and political smarts should not be
underestimated or given short shrift. First, Audley is a far more
effective political communicator than Andrew Holness. Andrew just does
not have platform presence. He is flat, unexciting in polemics and
gimmicks (important in our political culture) and does not have a
mastery of patois. He is too refined on the platform. Too much of a
good, uptown boy. Audley, on the other hand, knows how to be loud,
boisterous, cantankerous, mischievous, wildly propagandistic and
partisan on the platform.

You must not forget the
pivotal role he played over the years in unveiling scandals and "suss"
on the PNP. These things give traction. They might not always win
elections, but they keep your party relevant and don't give you the kind
of backsiding the JLP got under sweet boy Andrew. (Please, I am being
descriptive, not prescriptive. I am for substance over style. But it is a
scientific fact that people are more emotional than
rational.)

Audley can "tek the fight" to the PNP in a
way that Andrew can't. Audley has the toughness, the spunk, the
attitude, the fight, the "chuck badness" style which the base prizes.
But, significantly, he knows how to code-switch. He can be your
rational, refined, rigorous conference speaker. He knows how to talk
fiscal prudence, fiscal discipline, economic growth, investments, etc.
He can woo investors and the business class. And he is not seen as an
irresponsible manager of the economy.

Audley was a competent finance minister,
despite PNP propaganda. There were a number of external factors beyond
his control, as the PNP is now learning. As finance minister, the
neo-liberals could not have been displeased.

So Audley
has the strengths of Andrew: He is a neo-liberal who is committed to
tax reform, pension reform and public sector reform. He believes in our
living within our means. The capitalist economy would be safe in his
hands. And he knows our influential capitalists. Andrew does not have
any strong personal connection with key private-sector players. (In
fact, Andrew is generally a loner and is not really close to
anyone.)

Audley knows the power brokers. And he knows
the masses. It's an excellent combination. He might be able to convince
his party that it needs him: That it needs someone who is known and
trusted by the power elite and who can be a rabble rouser when he needs
to be, to stir up the masses. For as Andrew has proven, middle-class
charm, clipped English, espousal of bourgeois values and pandering to
the elite agenda are inadequate to win elections. (He was honest and
promised "bitter medicine".)

But Andrew has a big
advantage now: He has the support of The Gleaner,
still a powerful institution. Don't watch declining newspaper
readership. Watch the fact that The Gleaner still
sets the agenda and is referred to by all the talk shows and influenced
by electronic media. If something is important to The
Gleaner it becomes important to the country. And Andrew
Holness has received two ringing editorial endorsements, two days
consecutively last week. That's significant. Andrew simply backed
something which The Gleaner has been lobbying for—
tax reform, particularly the reforms set out by the Private Sector
Working Group.

He showed courage by backing the
removal of General Consumption Tax on basic foods while the Prime
Minister has baulked at it. This has earned him kudos by The
Gleaner and that counts for a lot. He has distanced himself
from people like James Robertson and The Gleaner
loves that.

Note also that The
Gleaner has been calling on the Prime Minister to "show
leadership" and to lead the charge in mobilising the people to accept
International Monetary Fund (IMF) austerity
measures.

The Gleaner last week
followed up its two-day Holness celebration with a stern editorial on
Wednesday, "Time for Mrs Simpson Miller to Bat". Some things are
emerging: It is clear that Portia is not going to be swallowing this
neo-liberal bait of the IMF and the local private sector hook, line and
sinker. She warned her National Executive Council last weekend that the
party must not forget about "people power" and why it was elected. She
boldly told international partners on Wednesday that, "The Government
will not ignore its responsibility to protect the poor, the vulnerable
and the dispossessed."

The battle lines are being
drawn and Holness is being seen by the power elite as the protector of
neo-liberal economics, while Portia is being painted as a coward
populist. Andrew will certainly be exploiting this to save his own skin
in the JLP and to continue to be in favour with the power brokers at
The Gleaner. Andrew will just have to speak out on
issues which will keep him favourably on the editorial page while Audley
will have to publicly back the neo-liberal agenda and show that he has
what Andrew lacks.

Ian Boyne is a veteran
journalists, Send comments to
columns@gleanerjm,com