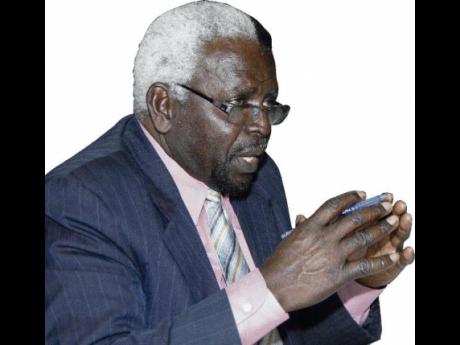 DEAR GOD, please let Pearnel Charles be prophet and not loss.Mr Charles has been accorded wagga-wagga press coverage on a variety of issues over the past couple of weeks. A thoroughly Jamaican term, which the wily old grass-roots politician who was born in the back bushes of Macedonia, St Ann, in another generation, will thoroughly understand and probably use himself. Public figure, public utterances, fair grist for the mill.

'Charles' Warning!' to a newspaper reporter that a "minor party" could sweep future elections if the People's National Party (PNP) and the Jamaica Labour Party (JLP) do not change made the front page. Many Jamaicans hope this is a prophetic pronouncement and not merely the moutha massy ramblings of a regular whiner whose party has developed the unhealthy habit of losing.

"If everybody says they won't vote, why shouldn't we believe that a new party can't come and wipe us out as established parties?" the Bustamanteite career politician told The Observer. The trigger for his concern was the low voter turnout for the local government elections and for the general election last December

The low voter turnout in the general election of December 29 last year, he said, had before that opened his eyes to the reality that the Jamaican people were in search of better representation.

"Our democracy is in serious threat. We must get the people to participate in the electoral process and it cannot be about candidates or parties buying votes or forcing a man to vote. That will not work," Charles warned.

"Democracy is at risk when those who should select those who govern them are not participating," he believes. People have been promised a lot of things through manifestos, yet very little has been accomplished. They are now looking at (not) voting as a way of registering their disgust with the system," he argued.

"The mashing up with stones, guns and gangs must go.

"The political system that we have now will have to be re-examined and recast. The system has split the country. It has gone past politics and is now engrained in the country's culture."

"Why am I so concerned about the direction in which governance has taken?" Charles asks rhetorically. "We need to look at who is benefiting. Is the little man in my constituency benefiting?"

When Charles as minister of transport batted for the little man some 30 years ago for independently owning individual public transport units, he created a mess which he lived to regret and which is haunting the country to this day. Little man (and little woman using sanitary napkins) politics, played by both political parties instead of national interest politics, is setting up to derail systemic tax reform which the country desperately needs for getting out of the debt and development doldrums.

Charles' concern for democracy is commendable. His frank acknowledgement of how partisan politics mash up things and has derailed development is refreshing. His implied equating of democracy with voting for the existing parties, cleaned up and reformed and engaging the population is well off mark.

There is a large and growing number of Jamaicans who feel that the country's democracy would be best served and its development agenda advanced if both or even one of the traditional political parties would disappear beneath the Caribbean Sea which wash our shores making way for one or more other parties to arise. Not "minor party" in Charles disdainful lingo, but a governing party.

Hard-nosed calculation, though, suggests that neither the battered and defeated JLP of Pearnel Charles nor the reigning PNP is going anywhere soon, and reform forced by civic action may be the best option. But it would be helpful if Charles is a prophet, seeing what others can't, rather than just a loss.

Another newspaper story, "When Pearnel Charles shot a man to save himself, veteran politician talks about the tumultuous times", chronicles through Charles' eyes the dirty union and political party wars which more than any other factor has held back this country in Independence.

According to Charles, thugs from central Kingston confronted and then attacked him in far away St Elizabeth at Alpart. The intent, he said was to shoot him since he and the BITU would not tek warning to stay away from the bauxite industry.

In one confrontation, Charles discharged his licensed firearm in self-defense and shot a man, aiming at his belly to not kill him. He was charged with shooting with intent but was acquitted. Years earlier his union and political mentor Alexander Bustamante had been charged with murder under similar circumstances when the unions with their strong-arm enforcers confronted each other at the Bellevue Hospital and Busta fired his gun. He was acquitted on grounds of self-defence.

Charles claims that PNP bad man Burry Boy, perched atop a Zephyr 6 motor car with a long gun, fired upon him and Mr Seaga when they were driving into the PNP stronghold of Central Kingston for a political meeting. Charles whipped around and drove straight to the safe (for them) JLP stronghold of Tivoli Gardens in western Kingston.

Charles spent 283 days in detention at Up Park Camp locked up by his longstanding antagonist Michael Manley then prime minister and minister of defence three days into the 1976 state of emergency as a threat to public order.

One of the charges against him was the distribution of guns in South-West St Andrew where he was designated to run against Portia Simpson who is now prime minister. The courts dismissed the charge.

Charles' own party battered up
him and his supporters and chased them away from the JLP annual
conference in 1992 as the JLP cannibalised its own during the infamous
Gang of Five saga.

I do not at all share the view of
The Gavel in last Monday's
Gleaner, delivered from behind a cloak of anonymity,
that Pearnel Charles' comments on crime policy are nonsense and ring
hollow.

Responding to proposals made by the Minister
of National Security Peter Bunting to reduce the number of police fatal
shootings, Charles remarked in Parliament, "we don't seem to be taking
the security of the security officers seriously. Some of the things you
are asking them to do - to run away from gunmen who are firing at them.
It is as if we are asking them to leave the
streets."

There is
absolutely nothing wrong with Charles' critical thinking here. His
observation is neither "nonsense" nor "constipation of thought and
diarrhoea of speech", as the wise and self-righteous feature,
The Gavel, has
rudely declared it, but is spot on.

Yes, the use of
lethal force must be minimised by reasonable means, but the police are
facing armed and dangerous gunmen embedded mainly in the protective
political garrisons whose formation and operation Pearnel Charles is
very familiar with. To reduce the capacity of the police to respond with
adequate force may very well be compromising the safety of officers and
of citizens. It most certainly will hurt morale.

The
unlawful excesses and abuses of the police must be investigated and
punished without hobbling operational capacity in one of the most
dangerous policing environments in the world. An environment largely
produced by the politics that the veteran politician wants to see the
end of.

The police, Charles said, "have to be fighting
gangs that we in the House know around us ... some that are associated
with political parties and we must take a stand to demolish those
gangs."

The Gavel's disdainful and
shallow critique of Charles is where the nonsense lies. The world and
her husband are sitting on the Jamaica Constabulary Force as the Evil
Force; where are the friends of the police?

Pearnel
Charles was one of the few members of the JLP who was prepared to appear
on television at a dejected Belmont Road after the party's crushing
defeat in the local government elections. What Charles had to say spoke
volumes about our dysfunctional politics and political parties: He had
won his divisions while many other MPs for the party did not, he told
the CVM reporter. Well the divisions of the parish council ought not to
'belong' to the Member of Parliament to win or lose or control. And I
hope that MP Charles will support local government reform in the
Parliament just like how he is speaking up for the
police.

Pearnel Charles had earlier made the news
threatening to block water trucks entering PNP-held constituencies in
Clarendon if none came to his. The old politics on both sides are alive
and well.

And Charles in speaking on election night
displayed a one-man independence which can only hurt his party's
interest.

'Onemanism' has been blamed to be at the
heart of the party's electoral misfortunes which now makes the JLP the
likelier of the two parties to make way for a fresh new political force
in the country, though I doubt very much if any such thing will happen
any time soon. Political parties, once entrenched, tend to have the nine
lives of a cat. But suppose Pearnel Charles, the aged political and
trade union warrior, who at five months short of 76 nuh done yet, is
prophet and not loss?

Martin Henry is a
communications consultant. Send comments to
columns@gleanerjm.com