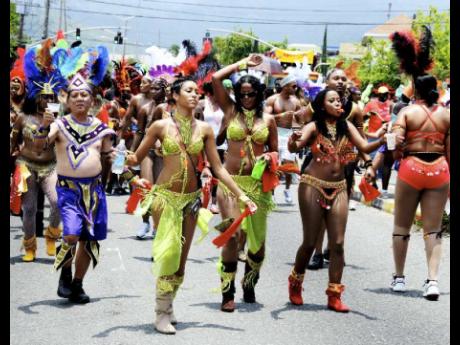 IT IS the single most important event in the lives of the majority of so-called Jamaican Christians, but so much of it is simply imagination. Perhaps it is good that we typically celebrate Easter as a big holiday with lots of bun and cheese and a major fair tomorrow.

Easter is a serious test of faith for both believers and non-Christians. First of all, some of the believers are so ridiculous that they were stuck to their television screens on Friday, watching the epic of Jesus' persecution, prosecution and execution and urging him, "Run nuh, dem a come." They even clenched their fists and grit their teeth over the treachery of Judas, somehow, hoping this time that he wouldn't 'sell out' Jesus.

Faith tells us that Jesus died and was put in a tomb (not buried) and he rose again the Sunday. Therefore, today, the day that he rose triumphantly from the dead having conquered sin and paid our price, we can finally get salvation. Of course, cynics will tell you that the only thing which was resurrected was the rumour of his greatness, because somebody might have given the Roman guards money to get the body.

After all, security guards were as underpaid then as they are now and the loss of a corpse of an unemployed Jewish loud-mouth, whose delusions of grandeur got him executed, couldn't have been a big deal. In any event, the amount of money 'guardie' might have got could have easily compensated him for his job loss. Thus, like our disadvantaged security
workers today, he could have even fallen asleep on the job after
drinking some liquor or simply left his post. Think of it! Guarding a
cadaver is not a major task; it cannot get up and walk
away.

Then a greater leap of faith is needed because
only the persons who believed that he was special saw him after he
allegedly came back to life. Therefore, no independent source provided
the information. We have to now rely on four gospels, which contradict
themselves, and which were written by persons who were not even there.
Honestly, it is not known who wrote the Gospel of Matthew as it was
anonymously written, but the early church leaders presumed it was him.
Mark was not an eyewitness to what he wrote and is believed to have
written from second-hand accounts from Peter. Like Matthew, Luke's name
does not appear in or on his account. But again, the Church filled in
the blanks as its leaders still do, and pointed to him. John is the one
who wrote as an eyewitness, although his name does not appear on the
manuscript either.

There are even some accounts which
clearly nobody was there, yet the writers wrote with authority and no
one even questioned them. For example, when Jesus was alone in the
wilderness according to Matthew 4:1-11, how do we know that he was
spoken to by the Devil and challenged to turn stones into bread? And,
clearly, nobody followed Jesus up to the top of the mountains when Satan
took him there. So, where did the writers get the story
from?

Then
again, as he suffered in the Garden of Gethsemane, his weak-fleshed
disciples couldn't 'bleach' with him. Yet, the writer in Mark 14:36 knew
that he said, "Father, all things are possible unto thee; take away
this cup from me: nevertheless not what I will, but what thou wilt." And
who overheard the conversation between Jesus and the man who was
crucified with him? Certainly not one of the 11 did because they had
gone into hiding and were as scarce as the 20 pieces of silver scattered
by Judas. Nonetheless, we 'know' that the stories are true. The problem
is that we don't think and because we do not think, we get accustomed
to acting and doing things instinctively and, in doing so, become slaves
again, oftentimes to our detriment. The Church has a huge
responsibility here.

Thus, if one's faith is so strong
that he believes the incredible then it is easy to see how a pagan
holiday, which encouraged the worship of the flesh and sexual wantonness
could miraculously become the most sacred holiday. The ancient Saxons
in England had a fertility Goddess called Eastre (Ostare), whose
celebration of spring, usually around the latter part of March, involved
a flesh feast with wanton sex. It was a 'flesh fest' and her sacred
animal was a hare; a wild rabbit, a creature which mostly eats and have
sex constantly.

Add to that the fact that Carnival, a
holiday alien to Jamaica until 1990, has its origins in the worship of
Dionysius the ancient Greek god of wine and the Roman festival for
Bacchus - for whom bacchanal is named, also the idol of wine. As with
horseracing and other vices, the Church must be
relentless.

So, in a
country whose Easter was mostly about our indigenous bun, appropriate in
a country where 30 per cent of children study for but fail the DNA
test, and where 'chawklit' is a middle and upper-class tradition, an
invasive cultural species is thriving. It comes with its values and
flesh worship, but there is nothing elevating about
carnival.

Unlike Trinidad and Tobago and New Orleans
which grew up with the traditions, the costumes are expensive and
Jamaicans are still not accustomed to women and heaven forbid, men
walking and wining up publicly, slightly dressed, with women showing the
dark mark of their African heritage despite the rest of their bodies
being brown. I have never been a fan of Jamaican carnival, especially
when we had abandoned the much more culturally relevant Grand Gala,
Festival King and Queen and Street parades. For years all that remained
of the Jonkanoo was the occasional masquerade by the politicians in
Parliament.

There might not be a causal relationship,
but it is just too coincidental that the level of violence and homicide
in this country has increased since the advent of carnival. Homicides
were 439 in 1989 but by the mid 1990s when carnival became entrenched,
they reached 780. Nothing in the social statistics make sense because
since 1989, poverty, unemployment, illiteracy and all of the well known
correlates of crime have been decreasing
steadily.

Even when murders dipped in mid 2010 in the
post-Dudus invasion period, violence against women and children remained
resilient. By the way, sexual offences are the worst cases of violence
because they leave lasting scars and, unlike homicide, they kill the
victims for the rest of their lives. Is it possible that something in
the psyche of the male would-be offenders is spiked or sparked by this
emphasis on the 'fleshtival?'

Maybe it is the old Easter demon which is
released by the carnality of carnival, but it is too coincidental that
around Easter, there are gruesome stories and most involve women or
children. In 2005, in the first week of April, a 15-year-old girl from
Tower Hill in St Andrew was killed by her 32-year-old lover, who then
committed suicide.

The year the Child Care and Protection Act was
passed, 2004, was a watershed year when there were 1,471 murders
including 119 children with a further 430 shot. Most telling was that
there were 900 reported cases of sexual abuse against them. True, it
might simply be that more persons are telling now as opposed to it
occurring more often. But the alarming cases of sexual abuse reported by
the Bustamante Hospital for Children, the two Montego Bay women found
in St Catherine and the breaking story of a young, pregnant woman whose
murder was attempted by one who should love her, all say the Easter
demon is loose again.

The sexual abuse the children
and women face, especially those which lead to death, is worse than
Jesus' crucifixion. I want the Church to stand with me on this
one.

Orville Taylor, PhD is senior lecturer in the
Department of Psychology, Sociology and Social Work at the University of
the West Indies, Mona. Send comments to
columns@gleanerjm.com.