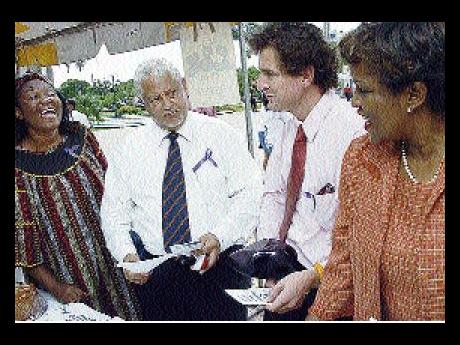 Over the past 16 years, the Jamaica Household Workers Association has evolved into a strong and focused organisation under the distinguished leadership of President Shirley Pryce (left) in this November 2005 file photo. Others (from left) are Dr Paul Robertson, minister of development; Bertrand Bainvel, representative for Women's NGO's and the United Nations Children's Fund and Carole Sewell, president of Women Inc. - File

IN JAMAICA, the mindset influencing the lives of domestic workers is firmly rooted in the inhumane conditions which determined the developmental path of our ancestors who endured the horrors of slavery.

It is within this historical framework that the link between economic inequalities is definitely linked to the various forces of violence that workers still experience in our society.

In 1996, Prime Minister the Right Honourable Portia Simpson Miller was the minister of labour, and the national machinery for women was one of her portfolio responsibilities. In her directive to the management of this state agency, the then minister explained the need for domestic workers, inner city and rural women to be empowered and supported to shape their role and conditions of work and general living standards in the Jamaican society.

To this end, the Bureau of Women's Affairs was mandated to provide office space for the Jamaican Household Workers Association (JHWA). Over the past 16 years the JHWA has evolved into a strong and focused organisation under the distinguished leadership of President Shirley Pryce.

It was indeed a significant social and political development when Ms Pryce was included in the 2011 tripartite delegation which represented the Jamaican state at the 100th session of the International Labour Organisation (ILO) that was convened in Geneva, Switzerland, on June 1, 2011.

On the 16th of June 2011, the ILO adopted a Convention (C189) for the protection of domestic workers with the support of 396 state parties. This Convention signals a major step towards justice and equity for the estimated 50 to 100 million domestic workers in the global village.

In analysing the important effects of this Convention, the following stood out for me.

Each member state of the ILO:

These are but a few of prescriptions in the 26 articles which are detailed and binding on State Parties in this historical Human Rights Convention.

In Jamaica, the domestic worker has been a steady feature of family life. She was among thousands of our ancestors who were subjected to forced, unpaid labour. She evolved into the ever-present nanny and cleaning lady in the post emancipation upper-crust household. She also created a space for her less fortunate sisters who were happy to become her children's helper, cook and washerwoman when she left home to work in missis' house.

Over time, she joined hundreds of women who migrated to the United States of America, Canada and England to be 'baby minders' and cleaning ladies in the parlours of New York, London, Toronto, Ottawa and other capitals of the developed world. During this transition, she found other employment choices and observed that thousands of Phillipino women replaced her in the attics of the well-appointed brownstones and suburban villas.

The sisters who stayed behind in Jamaica still trek up the urban streets to the exclusive gated communities and take their assigned spaces in kitchens, washrooms and children's quarters.

In rural Jamaica, there is a sizeable cadre of domestic workers who continue to give loving care to the aged, the lonely hearts, the new landed gentry and the professional and business classes under varying conditions of comfort.

While many of these domestic workers work in adequate surroundings and are paid in line with the government's directives on minimum wage, far too many do not experience the level of decency and respect that should be extended to every human being.

It is, therefore, a great opportunity for the Nation State of Jamaica , in its fiftieth year of Independence to lead the CARICOM region in the ratification of the ILO Convention Concerning Decent Work for Domestic Workers.