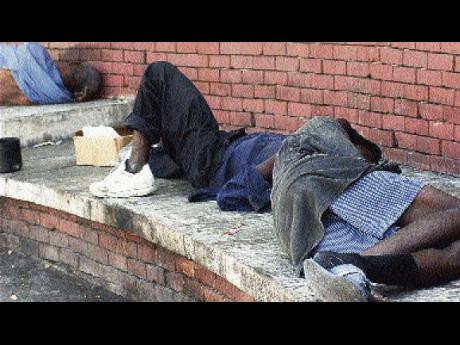 Many deportees, with no money and no family, end up homeless in Jamaica. - File

Legal challenges being brought by convicted criminals in the United Kingdom (UK) have resulted in a reduction in the number of Jamaicans being deported from that country. According to the Ministry of National Security, the incarcerated criminals have been arguing in UK courts that expelling them from the UK would be a breach of their human rights.

"The main reason for the reduction in the number of persons being deported from the United Kingdom relates to legal challenges in the UK on the grounds of human rights," read a section of a written response by the Ministry of National Security to Sunday Gleaner queries.

Data published in several editions of the Economic and Social Survey Jamaica (ESSJ) show that more than 34,000 Jamaicans were deported to the island between 2000 and 2010, with close to 11,500 of that number coming from the UK.

But the number of deportees from the UK has since seen a steady decline, with just 458 persons being deported in 2010.

So significant is the decrease in the number of Jamaicans being banished from the UK that the British government has axed the chartered flights it has used for years to expel errant Jamaicans from its country.

Now, the Jamaicans are being sent back to the land of their birth via commercial flights.

The decision to pull the plug on the chartered flights was reportedly done because of the frugality of the British government which underwrites the cost of deporting the Jamaicans.

"The number of persons being deported from the United Kingdom has been decreasing over the years. As such, projected loads for these chartered flights have not been realised to make them economically viable or warrant a charter," the

The ministry also moved to quell whisperings in the UK that the chartered flights have been discontinued because of a stand-off between Kingston and London over the number of persons being deported.

"Relations between the Jamaican and UK governments continue to be excellent and remain very strong. In the area of deportation, there are no challenges in relations that have impacted negatively on the number of deported persons from the UK to Jamaica," said the ministry.

"Deportees returned for convictions were mainly in the categories Overstay/Illegal Entry/Re-Entry and Possession of Drugs, 41.9 per cent and 30.2 per cent, respectively," read a section of the survey.

The report noted that deportations continued to be an area of major concern in the international arena and even more so for Jamaica.

However, while there was a record number of deportations worldwide due to the implementation of strict immigration controls and border-management approaches, Jamaica still recorded a decline in the number of deportees sent back to the island in 2010 when compared to 2009.