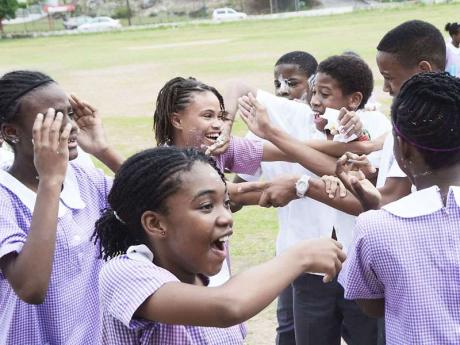 Jubilant students of Sts Peter and Paul Prep in St Andrew playfully throw cake and icing at each other at the end of the Grade Six Achievement Test last month. - File

Psychosocial assessments conducted on close to 6,000 students who have failed the Grade Four Literacy Test four times have determined that their ability to learn is being hampered by environmental and other social factors.

The assessments have found that more than 80 per cent of the failing children were experiencing difficulties learning, not because they cannot learn, but because of external factors beyond their control.

"It should also be assumed from assessment findings that with the majority of students, family and community; social and physical environments are additional forces impacting their students' performance," read a section of the Alternative Secondary Transitional Education Programme (ASTEP) summary provided by the education ministry.

"In moving forward, addressing the academic circumstances of these underachieving students cannot be done in isolation but must incorporate making adjustments to the social environment. To this end, the matter of students' emotional adjustment is priority even as the businesses of their academic (and physical) circumstances are being addressed," the summary added.

Education Minister Ronald Thwaites described the results as a tragedy. "I'm not surprised at these figures. It confirms (previous) observations," said Thwaites in a telephone interview last Friday.

Thwaites reiterated that the emphasis of his administration would be to fix the plethora of problems that exist at the early-childhood level.

He argued that if the problems at that level are addressed then the country would not be faced with the "tragedy that the study has evidenced".

Thwaites added that all stakeholders - including parents and the community at large - would have to join forces if the persistent maladies plaguing Jamaica's public-education system are to be remedied.

The results of the recently concluded assessments have prompted the Ministry of Education to list students' emotional adjustment as a priority issue.

The education ministry argued that addressing the external factors hampering the children's ability to learn can only be done in partnership with the parents and the community in general.

The
assessments were conducted in preparation for the implementation of
ASTEP, which is designed to provide an alternative instructional path
for children who, after four sittings of the Grade Four Literacy Test,
have not been certified literate and, therefore, will not transition
immediately to secondary schools via the Grade Six Achievement
Tests.

"The testing of students was to identify the
learning readiness of students in order to customise lessons for them to
address their individual learning needs," the ministry
said.

According to the education ministry, "five
reputable testing agencies" were used to conduct the assessments on the
5,800 students. The activity lasted approximately three
months.

The islandwide assessments were done by
regions.

The
education ministry, which divides the island into six different regions
for administrative purposes, noted that the assessment findings varied
across the country.

"Students from St Thomas and St
Elizabeth were found to be mostly tactile/activity-based learners with
mostly environmental issues contributing to learning
difficulties.

"About 35 per cent of those assessed had
real learning challenges. Approximately 33 per cent of students need
evaluation for hearing, dyslexia, autism or other medical/psychological
problems, while another 60 per cent of the students are sensing and/or
kinaesthetic learners."

The report pointed out that
the students from St Thomas and St Elizabeth have never been assessed
for learning style.

Of
the nearly 900 students assessed across Region Four - St James, Hanover
and Westmoreland - approximately 80 per cent of them had intellectual
deficiencies.

"Visual spatial, visual tracking and
visual perception impeded reading and accounted for the literacy
deficiencies. A very small proportion of students achieved an
intellectual ranking within the low and average range. The vast majority
of students in this area were found to be functioning well within the
intellectually deficient range.

"The indications are
that most of the students are classified as borderline. In general, when
these students were also required to do arithmetic problems (ranging
from very basic to fairly demanding) with the benefit of pencil and
paper, most found the task difficult and well beyond their current age
and grade levels," the report said of the students from Region
Four.

The experts who administered the psychosocial
assessments concluded that none of the Region Four students achieved a
grade level above grade four in mathematics.

"In
regions 1, 6 and 3, and in addition the parishes of Portland, St Mary
and Manchester, an even combination of environmental challenges and
learning deficiencies were identified which impacted the also low
average performances indicating literacy and numeric deficiencies of the
students," the ASTEP summary report stated.

"Over 80
per cent of the approximately 4,000 students that were assessed were
classified in the moderately intellectually deficient range requiring
special-education
intervention."