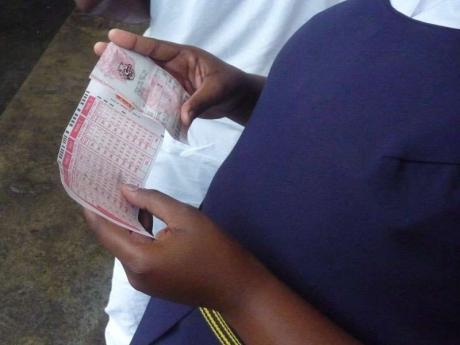 A student in her uniform about to mark the numbers she wants to bet. It seems no restrictions are placed on minors by gaming shops.

While the Betting, Gaming and Lotteries Act is clear that selling lottery tickets to children is illegal, the prospect of one more sale causes many agents and betting shops to ignore the law.

The law expressly states that, "A person shall not permit a minor to bet, negotiate or otherwise participate in any betting, gaming or lottery activity regulated or prohibited under this Act".

It also stipulates that minors should not be allowed in any room in which gaming machines are located.

In order to not be found guilty of an offence, a person must prove, to the satisfaction of the court, that at the time of the offence, he or she took all reasonable steps to ascertain, and reasonably believed, that the person was over the age of 18 years.

No such steps were taken when The Sunday Gleaner news team took to the streets with two minors after receiving parental consent.

The first stop was in the country's capital city. Our news team visited an off-track betting shop on Orange Street in downtown Kingston.

It was no place for children to be. The foul smell of second-hand smoke tainted the air.

The betting shop floor was littered with a variety of plastic bags from salted peanuts to bag juice. Crumpled bets were everywhere. It seemed there weren't many winners that day.

It was evident that we were in a hard-core gambling shop and the characters present bore witness.

Still, both minors success-fully purchased 'a ticket to their dreams'. Russell, who was dressed a a pair of jeans and T-shirt, had no problem making the purchase but Kadian, who was in her school uniform, was upbraided by the cashier before she "gave her a chance".

The cashier told Kadian that she should be ashamed of herself for attempting to gamble in her school uniform. But the machine went 'chi-ching' as she took Kadian's $1,000 bill.

She told our news team that she sold Kadian the ticket because the schoolgirl was humble. That was in reference to the meek manner in which the student took the scolding she got before being sold a ticket.

The supervisor at the shop promised to be more vigilant next time. "As long as they look underage, we won't sell them," she said. After taking a second look at Russell, both the supervisor and the cashier agreed that he looked young.

The cashier revealed that gambling minors are a problem at her location because she is forced to turn away up to 10 students each day. "Dem daring, you hear me tell you. Mi nuh know if a true a garrison," she said.

The next stop was at a shop on King Street. The agent turned back Kadian twice but, again, Russell was a breeze.

Interestingly, the agent got up from her seat and gave Kadian some free advice: "Ask an adult to do it for you".

The agent said she sold Russell because he "tricked" her. But the teenager spoke no words to make the case for his age. He was never asked. A poster at the front of the store said SVL (Supreme Ventures Limited) "encourages responsible gaming" and that "players must be 18 years or older".

The managing director of the store told The Sunday Gleaner that sometimes their best efforts to prevent minors from gambling are not enough.

"We try our best but you can't scrutinise everybody ... . It is very hard," he said.

The businessman said the matter is compounded because not every Jamaican has an ID card.

He argued that any insistence that purchasers produce some form of identification would result in a loss of business.

That cashier said that gambling minors are a serious problem as she has to turn back up to 30 students each day.

The third agent our news team put to the test was at a facility off Old Hope Road near Matilda's Corner in St Andrew.

The cashier roughly dismissed Kadian as she attempted to purchase a Pick-3 ticket. "That was so harsh," Kadian said. But Russell was again the smooth operator.

Once again, the agent failed to ask for an ID from a young man with very limited facial hair.

The team leader at the store later told our news team that Russell looked like he was 18.

"Him no look like schoolers," said the team leader, who argued that asking for an ID could lead to a confrontation. "Mi nuh want nobody box mi inna mi face," she said.

"We are going to start asking for ID. If they don't have it, they are not going to get a ticket," said the cashier who broke the law.

The guilty cashier said she did not know that selling to a minor could result in a fine of up to $1 million. "A so much? I thought it was $50,000," she said.

Next up was the wholesale in Barbican where the cashier rejected Kadian's bid to wager and promptly told her that she was not going to jail for her.

But it was again easy for Russell. Again, no ID was requested. This cashier was also oblivious to the fact that she could spend three months in prison or be fined up to a million dollars.

She told our news team that she has to turn back at least three students in uniform on a daily basis.

The final destination was an upscale gaming lounge in St Andrew.

This time, Kadian did not make it past security. But Russell, who added a jacket to his jeans and T-shirt, walked right past the security guard.

Once on the casino-like floor, Russell was able to purchase a cup of coins worth $1,000 plus a lotto ticket.

When confronted and told about the breach that just occurred at her establishment, the operations manager argued that the gaming lounge is usually very strict.

After looking at Russell for a few seconds, she concluded that he looked too young to be on the floor much less to be sold a cup of coins and a lotto ticket.

The vice-president of corporate communications at the company told our news team that the procedure is that when agents are in doubt, they should ask for an ID and if the person is unable to produce one, he/she should be asked to leave.

The vice-president said asking everyone to produce an ID would, "culturally open up a can of worms".

However, she said the gaming lounge would discuss the issue.