The cultural life of the city 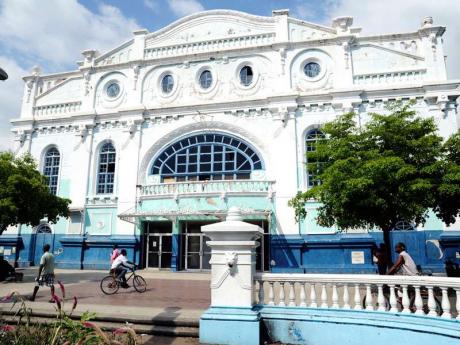 Despite many disasters, the city of Kingston has recovered to reign as the primary residential, economic and commercial centre of the island. It also emerged as the cultural capital, hosting many social activities and erecting structures to host cultural events.

The Parade Gardens, which was previously the Military Parade Grounds, was transformed into a public park in 1870 and was officially opened to the public in 1872. Many exotic plants, as well as local trees and shrubs, were planted there. The park became a refreshing site for the city workers and an oasis for residents of the city. It was a place for leisure, relaxation and public gathering. In 1914, it was renamed Victoria Park in honour of Queen Victoria. A statue in her honour was erected there from as early as 1887.

In 1977, the park was again renamed the St William Grant Park, in honour of one of Jamaica's labour leaders and black nationalists. Grant was inspired by the teachings of Marcus Garvey and preached his philosophies on every available platform, including those provided by the park.

The Theatre Royal, now the site of the Ward Theatre, was the centre for theatrical productions, plays and pantomimes. By the 1860s, operas were being staged at the theatre as well as acrobatic exhibitions. Movies, shown by a projector, were also a part of the entertainment scene in those days, along with puppet shows, which were extremely popular with the young.

The Theatre Royal was destroyed by the 1907 earthquake, but the Ward replaced it in 1911, continuing this cultural tradition. The majority of the earliest plays at the Ward tended to be Shakespearean productions, performed by travelling British troupes, as well as local dramas by groups comprised mainly of colonials. The two world wars, 1914-1918 and 1939-1945, caused a lull in the number of foreign acts and a rise in local productions, and from then on Jamaican theatre began to come into its own.

Since 1941, for example, pantomimes have debuted at the Ward on Boxing Day. The pantomimes have exposed local talents such as Charles Hyatt, Ranny Williams and Louise Bennett.

The Ward Theatre has also been the stage for civic events such as state visits and national celebrations; and the first two political parties - the People's National Party and the Jamaica Labour Party - were launched on its stage.

The Institute of Jamaica was established in 1879 to help Government in the advancement of culture on the island by developing an understanding and appreciation of literature, science and art. It also served various other functions, such as holding adult-education classes until the development of the University of the West Indies in 1948.

Like the Ward Theatre, the institute's mission was at first geared towards the colonials. It was not until the 1960s that the exhibitions began to reflect the Jamaican people in general and the public programmes began to be opened up to larger audiences.

As the beginning of the 20th century approached, Kingston was a natural choice to host the 1891 Great Exhibition, an international showcase for the island's natural beauty and talent. Magnificent hotels were built in Kingston, including the Myrtle Bank on Harbour Street and Queen's at the corner of Heywood and Princess Streets, to house visitors to the exhibition.
This marked the beginning of Jamaica's tourist
industry.

Unfortunately, these hotels were destroyed
in the 1907 earthquake. However, the Myrtle Bank was rebuilt in 1909 and
was later sold to the United Fruit Company. It became the largest and
most elegant in the city of Kingston. Its heyday was in the 1920s and
1930s, when it was the social centre of Kingston. At that time, only the
white population could visit or stay there.

In 1943,
the Issa family bought the hotel and abolished the colour ban.
Unfortunately, Myrtle Bank was again destroyed by fire in 1966. The
remains were soon demolished, but the site still contains some of the
palm trees for which the Myrtle Bank was also
famous.

Liberty Hall, located at 76 King Street, was
an important meeting place for the residents of and visitors to
Kingston. From 1926, it became the headquarters of the Universal Negro
Improvement Association (UNIA), which Marcus Garvey, Jamaica's first
national hero, had founded in 1914 while living in the United States of
America. Its slogan 'One God! One Aim! One Destiny!' became a symbol of
hope for the downtrodden, black race in Jamaica and around the world.

The building was the first meeting hall in Jamaica
that was fully owned and operated by blacks. It was a home to plays,
concerts, dances, elocution pieces, and adult and children choirs. One
famous play which took place there was Slave Ship,
which recaptured the horrors of the Middle
Passage.

Liberty halls, including the one in
Jamaica, were seen as the spiritual tabernacles for the entire UNIA
movement, and members everywhere were inspired to establish them as
meeting places in their communities. Many Jamaicans benefited from the
educational activities that were held at Liberty Hall. These included
Sir Phillip Sherlock, educator, social worker, former secretary of the
Institute of Jamaica and vice-chancellor of the University of the West
Indies; Father Gladstone Wilson, who in 1932 became the first Negro
tutor at the Urban College in Rome; Wesley Powell, who later founded the
Excelsior Education Complex of institutions; Dalton James, noted
teacher; and Amy Bailey, an advocate for women's rights. Actors and
musicians also benefited from the performances that were held
here.

By 1927, when Garvey was deported from the
United Sates, there were 1400 liberty halls in different parts of the
world. Liberty Hall, King Street, was sold in the 1930s, following the
failure of business enterprises undertaken by the UNIA, including the
collapse of the Black Star Line Shipping Company.

The closure of Liberty Hall created a void in
the town. Persons who once attended the various functions at Liberty
Hall had to find alternative places for social activities and social
gathering.

After 60 years of inactivity and decay,
Liberty Hall, King Street, was purchased by the Government of Jamaica
for the people of Jamaica in 1987, the centenary of Garvey's birth. It
was restored and finally reopened on October 20, 2003. It now houses the
Garvey Multimedia Museum, the Garvey Research Library and the Garvey
Multimedia Computer Centre. The Garvey Great Hall, located on the second
floor, is a venue for public functions such as symposiums, lectures and
cultural events.