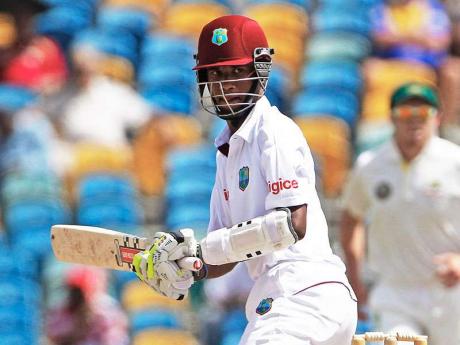 Vice-captain Kirk Edwards and teenage opener Kraigg Brathwaite stroked contrasting half-centuries to give West Indies a strong start, but rain forced an anticlimatic end to the opening day of the first Test against Australia here yesterday.

Edwards struck an entertaining 61, while Brathwaite carved out a painstaking 57 as they helped propel West Indies to 179 for three, an hour after tea at Kensington Oval.

However, steady drizzles swept across the ground at 4:02 p.m. and persisted until the scheduled close, forcing umpires to abandon any hopes of a restart.

Stylish left-hander Darren Bravo was unbeaten on 20 at the close and was partnered by veteran Shivnarine Chanderpaul on eight.

It was a disappointing end to a day that promised so much, especially after Edwards and Brathwaite batted with consummate easy against an Australian attack devoid of penetration.

The pair put on 104 for the second wicket, a partnership that was ended 18 minutes before tea when Edwards smashed a return catch to part-time leg-spinner David Warner at 142 for two. He faced 107 balls in 147 minutes at the crease and struck nine fours and a lofted six over long on off off-spinner Nathan Lyon.

In contrast, Brathwaite was his usual obdurate self in an innings spanning a shade over four and a half hours, requiring 199 balls and containing four fours.

He lived somewhat of a charmed life, however. He was put down by fast bowler Peter Siddle on 10 off a sharp caught and bowled chance at 25 without loss, and was also dropped by Ricky Ponting at second slip off medium pacer Shane Watson when on 44 at 104 for one, as the fielder dived one-handed to his right.

Brathwaite ran out of luck half an hour after tea when he nibbled at a delivery of little merit from Siddle and was taken behind by debutant wicketkeeper Matthew Wade.

Brathwaite and Adrian Barath had earlier posted 38 for the first wicket after West Indies won the toss and opted to bat in excellent conditions.

Barath was cautious at the start and his only real attacking stroke was a well-timed off-driven boundary off Siddle.

He also edged a loose drive at Siddle just wide of Mike Hussey at gully for four, but entertainment was limited as West Indies chose vigilance over exuberance.

Fifteen minutes into the second hour of the first session and against the run of play, Barath fell to a loose shot, attempting to hook fast bowler Ryan Harris from outside off stump and top-edging a simple catch to Siddle at backward square. He struck two fours and faced 54 balls in 74 minutes at the crease.

Edwards then joined Brathwaite to further frustrate the Australians, carrying West Indies to lunch at 60 for one before expanding their partnership afterward.