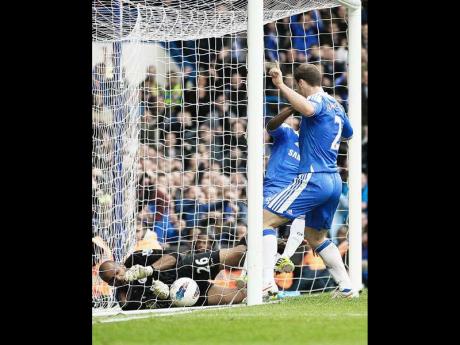 Tottenham's top-four status in the English Premier League was weakened by a draw at Sunderland as Chelsea moved closer to the Champions League places by clinching a victory over Wigan in stoppage time yesterday.

Harry Redknapp's Tottenham endured a frustrating afternoon as Sunderland held on for a 0-0 draw.

Arsenal are in action today, hosting a Manchester City side desperate for a victory to keep the pressure on leaders Manchester United, who are five points ahead.

Liverpool's league campaign is a face-saving mission following the eighth-place team's worst run in 58 years and Luis Suarez ended a run of three successive losses by salvaging a 1-1 draw against Aston Villa.

No change in standings

There were no changes within the relegation zone with Wigan losing at Chelsea, Blackburn going down 3-0 at West Bromwich Albion and bottom-place Wolverhampton Wanderers losing 2-1 at Stoke.

Despite several chances to the team that beat Benfica to reach the Champions League semi-finals on Wednesday, Chelsea laboured in the first half. And the hosts took the lead in contentious circumstances in the 62nd minute. Branislav Ivanovic appeared to be in an offside position when he knocked the ball into the net after meeting Raul Meireles' through ball, enraging the Wigan team.

Mohamed Diame did level for Wigan in the 82nd with a fierce left-footed strike from distance, but the visitors couldn't hold on for a point that would have lifted them out of the relegation zone.

In the third minute of stoppage time, after Fernando Torres' strike from a tight angle came off the post, Mata pounced to lash the ball into the net from what Wigan manager Roberto Martinez said was also an offside position.

"We fought until the last minute for the three points, having a lot of chances to score," Mata said. "We got a little lucky in the last minute and the points are important for us. Chelsea never give up."

In the northeast, Tottenham manager Redknapp was unhappy that his side failed to overcome Sunderland, with Gareth Bale, Emmanuel Adebayor and Rafael Van der Vaart missing chances.

"You've seen teams get in positions where the pressure gets to them, but I think we're quite a laid-back bunch and will just get on with it," Redknapp said. "I don't think the players get as uptight as I do or the punters do."

Sunderland are ninth, one place and a point behind Liverpool, which have not won at Anfield in the league in nearly a month.

Chris Herd netted Villa's opener after 10 minutes, taking advantage of debutant goalkeeper Doni's failure to deal with a cross, with Pepe Reina suspended. But Suarez headed home from close range in the 82nd after Daniel Agger headed against the underside of the crossbar from Steven Gerrard's cross.

At Bolton, 10th-place Fulham denied the relegation-threatened hosts a fourth straight win, with Clint Dempsey scoring twice in a 3-0 win to take his league tally to 15 goals this season.

West Brom ended a run of four games without a win by beating Blackburn by the same score line. After Martin Olsson turned the ball into his own net from Gareth McAuley's header across goal, Marc-Antoine Fortune and Liam Ridgewell scored for West Brom. Blackburn substitute Anthony Modeste was sent off only 10 minutes after going on.

Norwich moved 12 points clear from Blackburn in the drop zone with a 2-2 draw against Everton.

Peter Crouch also netted his 13th of the season to secure the victory for mid-table Stoke that plunged Wolves closer to the League Championship.