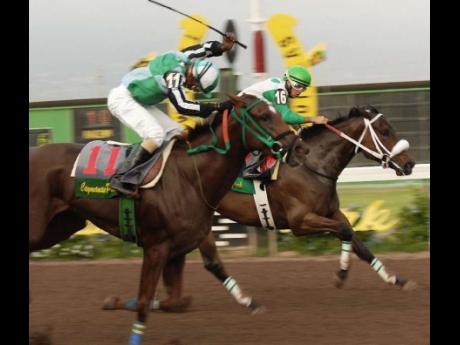 The 99-1 outsider SHE'S TRADITIONAL (outside) is hard driven by Trevor Simpson to beat 6-1 chance STAR FLYER, with champion jockey Dick Cardenas aboard, by a short head in the 38th running of the 1000 Guineas over 1600 metres for 3-y-o fillies, at Caymanas Park yesterday. - Colin Hamilton/Freelance Photographer

SHE'S TRADITIONAL, running at gigantic odds of 99-1, scored a shock victory in the 38th running of the 1000 Guineas over 1600 metres for native bred three-year-old fillies, at Caymanas Park yesterday.

Ridden by five-time champion jockey Trevor 'Slicer' Simpson for trainer and part-owner Fitzroy 'Pumpkin' Glispie, SHE'S TRADITIONAL got up on the line to pip the previously unbeaten STAR FLYER (6-1) under champion jockey Dick Cardenas by a short head, with the 6-5 favourite TRINITHETUTOR staying on strongly on the outsider to finish another three-quarter length away third in a blanket finish.

SPARKLE HAVEN, who was arguably the best prepared filly coming into the race, was declared a late non-starter (lame), reducing the field to 15.

This, the season's first classic, really lived up to expectations in that it produced a thrilling finish, which at one time after the race, indications were it was a dead-heat between the top two. But a close examination of the photo-finish revealed that SHE'S TRADITIONAL on the outside had just got there in the last stride.

She was held up just off the early pace in sixth passing the half-mile, as the 40-1 outsider AWESOME CAMILLE led narrowly from ANTOINETTE (78-1) and STAR FLYER, with SLICE OF LIFE (80-1) and TRINITHETUTOR under four-time champion jockey Omar Walker racing in touch.

STAR FLYER came through to grab the lead from ANTOINETTE as they swung into the straight and although looking likely to hold on midway through the last furlong, the lightly raced filly from the stables of Anthony Nunes only surrendered on the line.

Beaten out of sight (seventh) by EXOTIC GOLD (fifth yesterday as 2-1 second favourite) in the March 10 Thornbird Guineas Trial Stakes over 1400 metres, SHE'S TRADITIONAL showed considerable improvement to beat the best of her sex now going a mile.

Glispie, though pleasantly surprised, said it was not by accident.

"She trained really well for the Guineas and having fitted her with the figure eight, I knew she would run a big race," said the trainer, who as a topflight jockey in the '70s and early '80s won the Derby on three occasions with LEGAL LIGHT (1977), ZELL (1978) and BLACK KNIGHT (1980).

"When she galloped six furlongs at exercise in 1:14.3 the other morning, Trevor (Simpson) said she could have gone faster. She looked more focused in the figure eight at exercise and while I would be happy to make the frame, this is a pleasant surprise," said Glispie, who was notching his first classic win as a trainer.

A chestnut filly by Traditional out of the Royal Minister mare Money Maker, SHE'S TRADITIONAL is co-owned by Glispie and Stenton Neil, bred by both and groomed by Eulitt Pittison, who said he told Simpson before the race, "Don't run the headline with her and she'll win".

On a day when leading jockey Dane Nelson rode three winners, Glispie had a second winner on the card in 7-2 chance SAGA BOY in the third race over the straight.

Wayne DaCosta's unbeaten American 3-y-o colt, BLAST THEM AWAY (Nelson up), duly made it six in a row by winning the open allowance sprint.