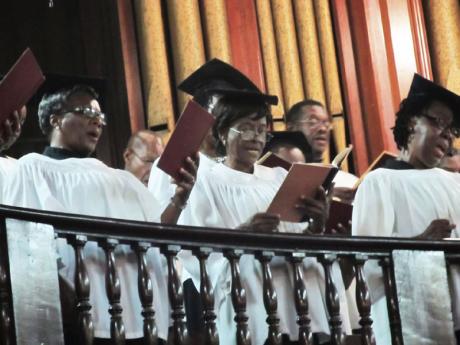 Members of The Cathedral Choir perform at their Good Friday Concert at the St James Anglican Cathedral in Spanish Town.- Photo by Marcia Rowe

Christians around the world used Good Friday as a day for reflection and meditation. And nowhere else was this more evident than at The Cathedral Choir's annual Easter Concert, held on Friday.

From the onset it was clear that the event was not the run-of-the-mill concert, but one that was refreshingly different and spiritually uplifting.

Imagine entering a church with its tall magnificent walls supported by well-defined arches, beautiful cut-glass windows occupied by a congregation approximately the size of its number of pews. Also, envision each member of the congregation deep in meditation while beautiful sounds of Stainer's Hymns from the Crucifixion, emanating from unseen voices, floats on divine sounding piped organs.

That was the unforgettable scenario that greeted The Gleaner at the Spanish Town-based St James Anglican Cathedral.

The picture of meditation was maintained for the duration of the evening's programme, well almost.

It actually changed for the final selection, Hallelujah from Handel's Messiah. And in so doing, revealed that there was indeed a larger number of persons in the congregation than was first perceived.

And for those who came out, it was another delightful evening.

In an approximately three-hour long programme, The Cathedral's Concert Choir delivered 'Works from the Masters' - the title of the concert.

The musical sermon was conducted from their centrally elevated space overlooking the pews.

Guided by organist and conductor Trevor Beckford, they performed God so Loved the World from Stainer's The Crucifixion, Maunder's O Thou Whose Sweet Compassion, Olivet to Calvary, before ending part one with Beethoven's Hallelujah, Mount of Olives.

Part two continued with a fulfilling performance of J. S. Bach's Organ Prelude in E Minor played by Beckford. Subsequently he was joined by the choir with Handel's Behold the Lamb, Muander's Just As I am, Olivet to Calvary, and Hayden's Earthquake, Passion.

The programme continued with a creditable performance of Ave Maria by soloist Jomo Aikens. A splendid rendition of another of Handel's arrangements, I Know that My Redeemer Liveth, Messiah, from tenor-soloist, Orville Manning was also of note.

Handel's Hallelujah was the closing act. And when the first note of the music was struck, the entire congregation stood, facing the black-and-white clad choir who gave a stirring rendition of the song, and a powerful ending to their evening of reflection and meditation.

This was followed by a brief pinning ceremony for the soloists, and the longest member of the choir, June Dale. Dale, who has been a member of The Cathedral Choir for 24 years, thanked her colleagues for working with her. "As she is not the easiest to work with".

In his closing remarks, chairman, Herbert Taylor, noted that "Trevor has farmed out the work" and thanked him for unearthing new talent.

After the concert, both Dale and Aikens shared their reasons for being in the choir.

According to Dale, her driving force is her love for singing. She also explained that she was asked to join the choir by Beckford after he heard her singing at a graduation.

On the other hand Aikens, joined the group in 2008. His grand-mother, who has since passed away, was a member of the choir for a number of years.

"You could just say I am picking up a legacy," said the recent graduate of St Jago High School.