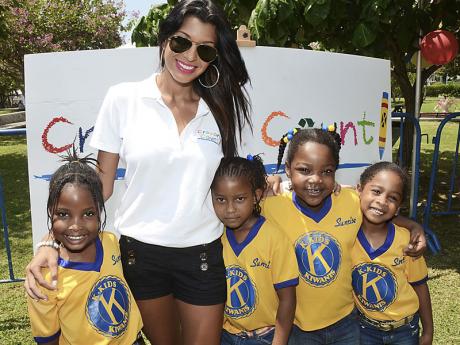 Reigning Miss Jamaica World Danielle Crosskill with some little ones at the recent fun day at Emancipation Park. - Rudolph Brown/Photographer

The reigning Miss Jamaica World (MJW), Danielle Crosskill, caught our attention last year with her captivating beauty, poise and elegance. She hopes to grab our attention once again, only this time it is meant to garner support and awareness for her latest philanthropic endeavour - Crayons Count. Crosskill heard about Crayons Count before it even began. She expressed her eagerness and willingness to aid the initiative in any way she could, as early-childhood education is something she is very passionate about, since she herself teaches.

She is part of the four-woman creative team behind the campaign. The other three women are Brittany Singh, who was also a contestant in the MJW pageant last year, Keri Allen and the project's founder, Deika Morrison. These four women are basically the cumulative minds which act as the brain behind the project.

Crosskill has been visiting schools to spread the word about the project and this has led to some of these schools joining the cause and doing their own drives to raise donations and increase awareness for the project. This reflects the positive feedback that the project has been receiving not only from schools, but the wider population and corporate Jamaica as well.

The campaign has also been seeking donations through social media and various events. Seeing that she is now the reigning Miss Jamaica World, she is also using her role to bolster awareness and support for the initiative by acting as a spokesperson for Crayons Count and giving the campaign a face. Crosskill is optimistic that the project will be a success and she is hoping that it will become an annual endeavour.

Crosskill also notes that the Crayons Count team is planning more events and more school tours. This is only a fraction of what the young philanthropist hopes to achieve in the long run, so you can be sure to see a lot more from her in the future.

Crayons Count is an ongoing campaign to support early-childhood education. The initiative, which is endorsed by the Early Childhood Commission (ECC), acknowledges two main objectives. To equip all early-childhood institutions (recognised by the ECC) with a learning kit of materials. These learning kits will include materials that, unfortunately, many children do not have access to, such as books, play dough, paints, crayons, etc. The project hopes to put one of these kits in more than 2,000 schools for the beginning of the next school year - September 2012.

The other objective is to increase the awareness of the importance of early-childhood education. The Gleaner, which is the main sponsor of the initiative, has been aiding this cause by running an activity page every Saturday. The activities on these pages are from the curriculum for early-childhood institutions and are expected to greatly aid children who do not have access to books.

Crayons Count plays on the word 'count', which is not only referring to the drive to collect and recycle used crayons, but also to highlight the fact that the items that they wish to provide in the learning kits do matter and are crucial in developing a strong educational foundation for these children.