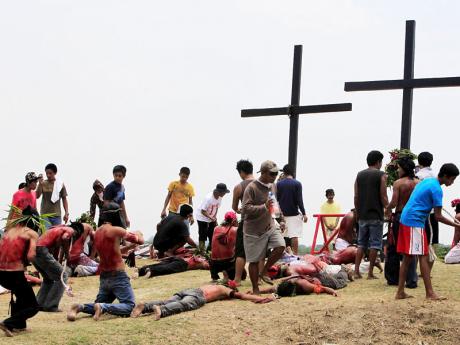 Hooded penitents flagellate themselves in front wooden crosses in a re-enactment of the suffering and crucifixion of Jesus Christ on Good Friday at San Pedro Cutud, Pampanga province, north of Manila, Philippines. More than two dozen Catholic devotees have themselves nailed on the cross on Good Friday, a practice rejected by the Catholic Church but becomes a tourist attraction.- AP

TENOSIQUE (AP) :Dozens of Central American migrants staged a mock crucifixion of one of their colleagues Friday to illustrate the dangers and suffering they face in southern Mexico.

The migrant who played the role of Christ, Roni Mazariegos Barreda, a 23-year-old farmer from Honduras, was tied to a cross atop the train that migrants frequently hitch rides on. The train, known as 'The Beast', runs through the southern state of Chiapas.

Central American migrants frequently cross Mexico hoping to get to the United States and find work. But they face extortion, kidnapping and robbery inside Mexico, both by drug cartels and corrupt authorities.

Call for end to violence

The organiser of the Good Friday event, Franciscan friar Tomas Gonzalez, said the aim of the Migrants' Stations of the Cross was to call for an end to violence against migrants. Since Thursday, migrants have carried wooden crosses along routes that they and their countrymen frequently use.

"We call upon the police, soldiers, as well as drug cartels and the crews of 'the Beast' to stop the violence they visit upon our Central American brothers," Gonzalez said.

In one of the worst attacks, 72 migrants were slaughtered in the northern border state of Tamaulipas by a cell of the Zetas drug cartel in August 2010. Most were Central Americans.

The Mexican government says the number of Central Americans crossing Mexico to reach the United States dropped almost 70 percent between 2005 and 2010.

In Mexico City, hundreds of thousands of spectators gathered Friday to watch a traditional Easter Week re-enactment of the stations of the cross and crucifixion of Christ in the low-income precinct of Iztapalapa.

The event has been carried out for 169 years in Iztapalapa.