Are you smarter than a sixth grader? 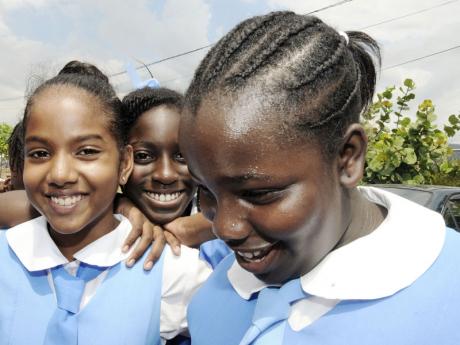 Students from Jessie Ripoll Primary School in St Andrew, Radiesh Dolam (left), Calese Hare (centre) and Kyana Brown were quite excited and confident that they had aced the first day of the Grade Six Achievement Test examinations last month.- File

In a bid to test the age appropriateness of Jamaica's national Grade Six Achievement Test (GSAT), The Gleaner asked five teachers and four university students to write the exam.

The cohort of nine sat four of the five papers that make up the annual test that is dreaded by most primary school students and their parents as it determines which high school the student will be placed in for the next five years. The participants sat the integrated science, social studies, mathematics and language arts papers. They were not asked to do the communication task paper.

The cumulative average score of the entire cohort of teachers and university students was 92.

The cumulative average scores for the science and math papers were identical - 91 per cent.

None of the participants scored full marks on all papers. As a matter of fact, only one person scored 100 per cent on two papers.

The early childhood educator scored a perfect hundred in social studies and language arts and came close to repeating the feat on the math paper on which she scored 99. The impressive performance was rounded off with a 98 on the integrated science paper.

Patrice Harrison, managing director of GSATready.com - an online academic support service provider - graded the test papers free of cost as she believed the results might be useful in helping to revamp the GSAT.

"Overall, I think you had good results given the composition of the sample because it didn't contain GSAT teachers.

"Most of the incorrect answers related to content that the participants would not deal with on a day-to-day basis, for example, identifying an isosceles triangle solely from a graphic depiction," said Harrison.

Arguing from her interaction with many of the island's GSAT teachers, the benevolent educator advanced that the results would have been considerably higher if a few grade-six teachers were included in the sample size.

Commenting on the results of the GSAT exercise, an educator who requested anonymity questioned the age appropriateness of the grade six exam because the teachers and university students were not able to achieve perfect scores.

"Adults in the working world and university students were still not able to score a hundred per cent cumulatively as one would expect. The inference is clearly that change needs to happen and quickly. There has been an outcry for a number of years but this is a concrete example, albeit a small sample, that something has to change," the educator advanced.

"Your experiment indicates that there needs to be a change. As to nature and extent of the change, that is up to the experts. But we do hope that those experts will recognise, in particular, the two subject disciplines of social studies and communication task, vis-a-vis the appropriateness of content," said Harrison. The Ministry of Education is in the process of reviewing the GSAT.

Earlier this year, the education ministry announced that it would bring in a consultant to conduct a revision of the GSAT at a cost of approximately $10.3 million (US$120,300). The overseas consultant is expected to work with the local team to conduct the review sometime before the third quarter of this year.

At that time, Minister of Education Ronald Thwaites said a review of the system was essential because there have been several calls for an evaluation for some time as it was felt that there were several flaws in the secondary school placement test.