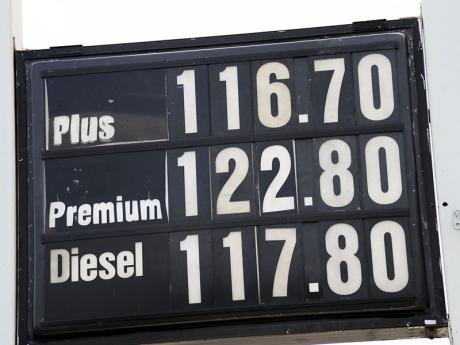 The prices of fuel at the pumps have soared since last year when the government reduced its take from the gas tax. Gas price at the Texaco station at the intersection of Half-Way Tree and Oxford roads St Andrew.- photos by norman grindley 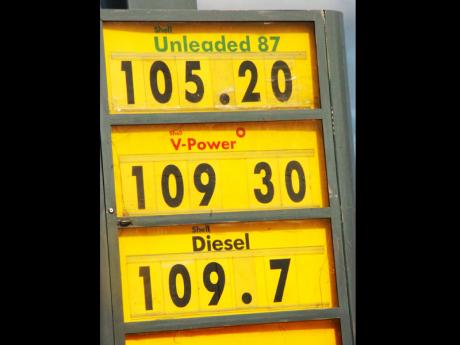 The Shell gas station on Marcus Garvey Drive reduced its prices in line with the reduction in fuel tax announced by Government. 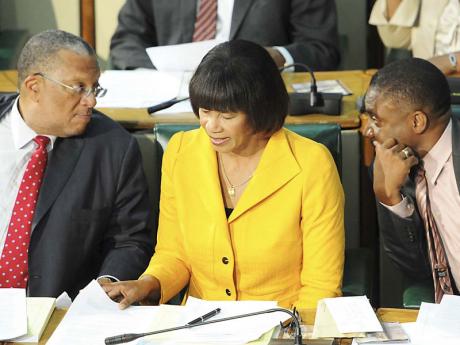 Prime Minister Portia Simpson Miller with Finance Minister Dr Peter Phillips and Phillip Paulwell, minister of science technology energy and mining during a sitting of Parliament. In opposition, all three had advocated for the cap of the ad valorem tax on fuel.
1
2
3

THE GENERAL election has been won, state power now rests with the People's National Party (PNP), and Phillip Paulwell no longer appears to be excited about ensuring fuel prices are kept low.

A few months ago, Paulwell's voice echoed across the country as he championed the cause of the Jamaican people and urged the then Government to cap the ad valorem tax on fuel.

Despite now being in the position to effect that change, Paulwell appears to have given up that fight, perhaps convinced that consumers of fuel should consider their paining pockets as a justified contribution to the national budget.

Fuel prices at the pumps are rising, Jamaicans can hardly afford to stay alive, yet, Paulwell, despite promising that Cabinet would examine a proposal to cap the ad valorem tax on fuel, is yet to report to the country.

One month ago Paulwell committed to review a proposal from the Jamaica Gasolene Retailers Association to cap the ad valorem tax on petroleum products at US$90 per barrel.

The Gavel, like most reasonable Jamaicans, is well aware that the cost of fuel at the pumps has very little to do with government policy.

We accept that the prices are a function of demand and supply on the volatile world market.

Nonetheless, we find it incredible that the Government, which when it was in opposition, had all the grand ideas about immediate actions to ease the pain, appears to have forgotten all the prescriptions.

At the time, they argued that when the uncapped ad valorem tax was first introduced, the Government planned to raise $9.4 billion from this measure for the 2010/2011 fiscal year.

The then opposition members argued that with fuel prices as high as they were the measure was extracting taxes far in excess of what was projected from an already depressed economy and over taxed population.

"This tax windfall now being reaped by the Government is counter-productive and unconscionable. The extraction of this unplanned additional amount from individuals and businesses, via the uncapped ad valorem tax, is further contracting aggregate demand and contributing to worsening unemployment and poverty," Dr Davies, then opposition spokesman on finance said.

"The Government must now cap the ad valorem tax, which now represents a burden to consumers, as petrol prices continue to escalate. Already there has been a reduction in demand for petrol as motorists simply cannot afford the high prices," Paulwell, the then energy spokesman added.

Paulwell, Golding, Davies and Clarke are all members of the Simpson Miller-led Cabinet, and to the best of our knowledge, they are aware of the escalating fuel prices. But somehow, we do not detect the militancy with which they approached the issue when they were in Opposition.

Many will recall that last April, faced with threats from the PNP to lead national protests over fuel prices, the Bruce Golding-led Government announced a reduction in the ad valorem tax on fuel from 15 to 10 per cent.

At that time the Golding administration said the temporary reduction in the gas tax would lower petrol prices by between $4 and $5 per litre.

"In taking this measure, the Government has rolled back and reduced the tax take on fuel to what it was when the price of oil on the world market stood at US$80 per barrel," a media release from the Office of the Prime Minister stated.

The Government, however, refused to impose a cap on the ad valorem tax or remove the 10 per cent General Consumption Tax on electricity bills as was requested by the PNP.

Although the then Opposition called off the protest, it sent a strong message that the move by the then Government was not enough.

"The party, however, will be continuing its advocacy on behalf of the people for a permanent cap on the gas tax as well as the removal of the General Consumption Tax on electricity. To this end, we anticipate, and advise the administration to address these matters meaningfully in the upcoming Budget," the PNP said in a statement.

The Gavel sincerely hopes that the people of Jamaica will not have to wait until next month to find out if the PNP administration will be capping the ad valorem tax.

While we are cognizant of the economic hole in which the country finds itself, The Gavel is of the view that the high gas price is having an adverse effect on the economy.

The Government must act, and act appropriately. It must cap the ad valorem tax component on the fuel and give Jamaicans a chance to breathe again.

And if it can't be done, the Government must speak frankly to the people and stop giving us false hope.