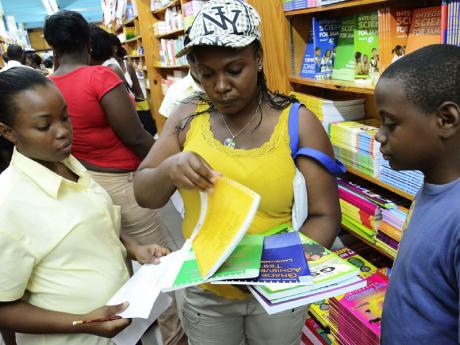 Parents shopping for back-to-school books. The BIAJ wants the government to remove GCT on the printing of books locally.

Some of the recommendations that were presented in submissions to the Green Paper on Tax Reform.

a) Tax-reform policy should include using taxation to reduce externalities;

b) JET agrees with the reduction on waivers. However, it believes that in the short term there should be exemptions, waivers and preferential tax rates for green technology;

c) The current EL should not form part of the new CAF. JET believes that there should be a dedicated tax that is used to address environmental issues;

e) Duties and taxes on vehicles should discourage vehicles with low fuel efficiency;

f) GCT rates applicable to the tourism sector should be higher.

i. Should be treated as an export industry; GCT should not have been imposed on the sector;

b) GCT: preferably 0 per cent; other options mentioned:

i. Exempt the sector from GCT;

ii. Reduce the existing rate (10 per cent) proportionately to any reduction in the standard rate;

iii. Maintain the existing rate of 10 per cent;

i. Supports the proposal to reduce customs duties to no more than 20 per cent

i. the ASD be maintained albeit at more moderate levels only for items that Jamaica actually produces and for the quantity produced; for items not produced in Jamaica, the ASD should be significantly reduced to no more than 10 per cent.;

i. Would support increasing the PIT to at least $850,000, particularly in light of the likely increase in the number of items subject to GCT;

f) Education Tax: should be dedicated to education;

i. The high corporate tax rate acts as a disincentive to investment; the rate should be lowered below 30 per cent;

i. Current incentives should remain and consideration given to treat the sector as one of export (including GCT rate 0 per cent);

i. If the GCT standard rate is reduced: the existing SCT payable by dealers should remain ;

ii. Increase the current rates payable on the importation of vehicles by individual by 5 percentage points.

i. Endorse the recommendation for the reduction in the rate;

i. The current concession regime should remain

i. Supports an increase to the fees; consideration should be given to the treatment of vehicles older than seven years as the vehicles have lost approximately 80 per cent of their values;

i. Allow deemed input tax on the sale of second-hand vehicles - this is to promote the second-sale trade;

a) JCSC is in broad support of much of the proposed tax reforms, as outlined by the PSTWG;

b) The Coalition supports:

i. The need for a phased approach to the removal of GCT exemptions;

iii. The need to build wider societal support and consensus "selling" of the reform package;

d) Agrees with reductions in the costs of basic food items to consumers but this must not be done at the expense of losing our agricultural and agro-processing sectors which will expose us to reduced food security.

e) Reorganisation of ports and customs:

i. There should be a comprehensive reorganization of these institutions and facilities, including modern security measures and employee screening;

i. Supports recommendations for the application of this principle, using incentives and sanctions;

i. There needs to be greater attention paid to aspects of the administration of the PATH Programme - specifically, criteria for selection, sensitivity in handling beneficiaries, especially children, management, reach and scope of benefits. PATH does not reach all those it should.

a) The BIAJ believes that a serious intervention is required to encourage reading in any media (printed matter, CDs, e-books and other digital forms).

i. In this regard, the association supports initiatives that reduce rather than increase the cost to produce books and, by extension, the purchase price of books for consumers.

b) Remove GCT on the printing of books locally.

c) Remove GCT from books on CDs, including CDs affixed to books and stand-alone book CDs.

a) Implement a 33 per cent rate for regulated entities, others 15 per cent - no adjustment is being proposed to the building societies tax regime (30 per cent CIT) or life assurance tax regime (15 per cent tax on investment income plus 3 per cent premium tax on gross premiums).

a) Abolition of annual tax-free threshold [currently J$441,168] and replacement with an Income exemption limit of J$499,200 per annum with marginal relief [at a rate of 25 per cent effective PIT rate.

b) Increase the 10 per cent GCT rate on the supply of electricity to 12.5 per cent

c) Zero-rating of residential electricity supplies under 300KW per month;

f) Increase the registration threshold from $3M to $5M

g) Removal of zero-rated and exempt supplies - including all foods - processed and unprocessed; books; energy-saving devices and related items and Construction services

a) Replace the sectoral incentive based regime with a competitive general tax regime that supports and stimulates productive activity;

b) Cessation of approval of new incentives under the Hotel/Resort Cottage/Approved Farmer regimes and Free Zone/EIEA regimes in respect of goods-producing activities;

c) reduce the income tax relief offered to new listing on the JJSE to 5 years;

d) Existing companies listed on the JJSE will continue to enjoy relief granted until expiry;

e) Cessation of other sector-driven direct/indirect tax incentives and waivers;

f) A Reliefs Monitoring & Enforcement Board is established with representation from the private and public sectors to make recommendations to the minister of finance in respect of any and all applications for reliefs that may arise within the reformed tax regime.