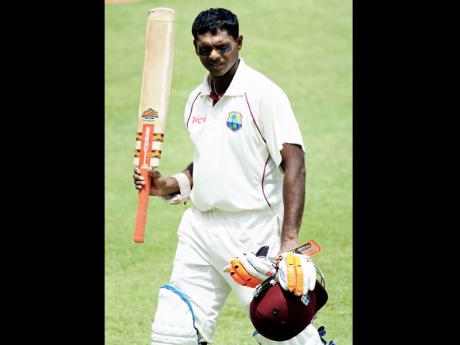 BRIDGETOWN, Barbados (CMC):Shivnarine Chanderpaul's 25th Test century underpinned a gallant batting effort as West Indies battled their way into a strong position on the second day of the first Test against Australia yesterday.

The veteran left-hander fashioned a typically patient 103 not out that helped propel the Windies to 449 for nine declared and keep Australia in the field for most of the day at Kensington Oval.

At the close, however, Australia were making a strong reply at 44 without loss with David Warner cantering to 27 from 29 balls, while Ed Cowan finished on 13.

Resuming the day on 179 for three, West Indies flourished through Chanderpaul and a typically elegant half-century from left-hander Darren Bravo who got 51.

It was Chanderpaul, however, who made all the headlines with yet another superb hundred characterised by his immense powers of concentration and remarkable discipline.

Overall, he faced 248 balls, striking nine fours and a six in an innings that lasted a shade under six-and-a-half hours.

In raising three figures, the 37-year-old went past the legendary Sir Vivian Richards for career centuries and is only now one away from joining the incomparable Sir Garry Sobers, who has 26 centuries.

Chanderpaul is now only 188 runs away from becoming only the second West Indies batsman behind Brian Lara, to reach 10,000 career runs.

He and Bravo added 73 for the fourth wicket against a lacklustre Aussie attack before Bravo gifted his wicket, edging a booming drive off medium pacer Shane Watson to Mike Hussey at gully.

Bravo looked set for a big score as he quickly found his stride, twice piercing the offside for boundaries off uncomplicated off-spinner Nathan Lyon in the day's sixth over before showcasing his class with two superb drives through cover off Harris.

In contrast, he moved from 42 to his third half-century in his last five Test innings with a couple streaky boundaries through the slip cordon off pacer Peter Siddle.

His soft dismissal just under an hour before lunch at 240 for four brought Deonarine to the crease and he added a further 45 for the fifth wicket with Chanderpaul.

Chanderpaul then put on 31 for the sixth wicket with Carlton Baugh (22) another 53 with captain Darren Sammy (41) for the seventh wicket.

Baugh batted sensibly for 39 balls before he was run out in a mix-up with Chanderpaul over a sharp single at 316 for six, 40 minutes after tea.

highlight of the session

This paved the way for Sammy's entrance and he proved to be the highlight of the session, carving out a cameo innings off just 36 balls, cracking four fours and three sixes.

The right-hander took a special liking to off-spinner Nathan Lyon, smashing the bowler straight for three fours in one over but it was his duel with medium pacer Shane Watson that took centre stage.

Struck on the helmet by a short ball from Watson, Sammy responded next ball with a majestic drive over long off for six.

In Watson's next over, Sammy punched him through cover for another boundary before imperiously swatting him over the ropes at mid-wicket, two balls later.

Sammy then lofted seamer Ben Hilfenhaus over wide long-on for another six but holed out to Cowan at mid-wicket two balls later, attempting another big shot at 369 for seven.

Chanderpaul was not be left out, collecting well-timed offside boundaries and a six off Lyon which sailed over long-on.

He lost Kemar Roach (16) and Fidel Edwards (10) but continued unfazed and brought up his landmark an hour after tea, with a couple to backward square.

He joined with Devendra Bishoo, 18 not out, to add 28 for the last wicket and further frustrate the Australians before the declaration came, leaving Australia to see out the last hour.

Position: Australia trail by 405 runs with all their first innings wickets intact.