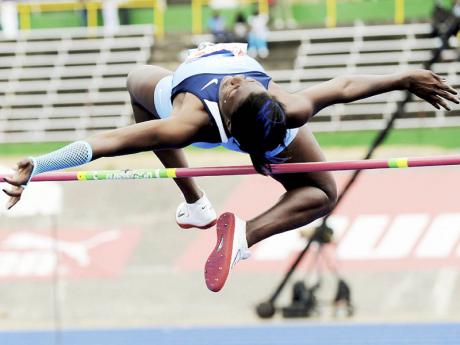 Record-breaking Paula-Ann Gayle and Xavier Boland highlighted a positive second day for Jamaica at the 41st Carifta Games at the National Sports Centre in Bermuda, yesterday.

Fifteen year-old Gayle improved on her silver medal won last year; bettering the previous best, 41.13, by setting a new mark of 43.99m, in the Under-17 girls discus, while Boland easily brushed aside his competition to win the boys' pole vault open event, despite unfavourable conditions.

Fellow Jamaican Venique Harris, 38.93m, was second in the Under-17 girls discus.

The Jamaicans, who shared the spotlight with an impressive Bahamas team from Saturday's opening day, created some daylight between themselves and the ever-improving Bahamians, pushing their medal tally to 50 medals compared to Bahamas' 24 at press time.

Boland, a multiple winner and record holder at 'Champs' was not particularly pleased with his performance, but was nonetheless happy to have overcome the conditions and win another medal for his country.

"I think I performed well, I got the gold for the country, I don't think I performed to the best of my ability but under the circumstances I am satisfied," said the multi-talented Boland, who will later this week represent Jamaica at the Carifta Swimming Championships in The Bahamas.

"The low temperature was a challenge, the muscles aren't easily flexed when they are cold and overall it slows you down but as I said, I did my best under the circumstances and I am happy with that," said Boland, a student at Kingston College.

"I was looking for a 5m (height) with good weather and a 4.60m with the weather that we had. I had it in me but it was just one of those things. It happened this way for a reason," said Boland, who will also look to show his best form at the upcoming Penn Relays and IAAF World Junior Championships in Barcelona, Spain.

Jamaica won two of the four

The Jamaican dominance continued in the Under-20 girls high jump with national junior record holder Kimberly Williamson winning with a 1.82m mark. Petergaye Reid was fourth after clearing 1.78m.

Janieve Russell was the class of the Under-20 girls 400m hurdles field, winning the gold medal in 58.80. Teammate Terriann Williams was third in 1:00.49, with Trinidad and Tobago's Kernesha Spann claiming the silver in 1:00.23.