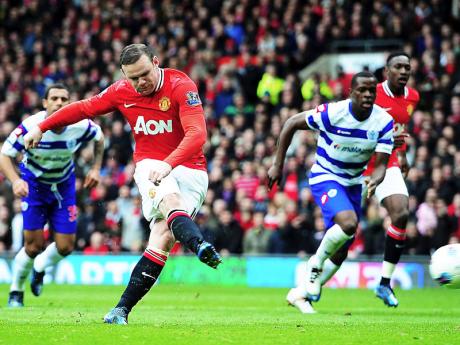 "We know what it takes to get over the finishing line first," United defender Rio Ferdinand said. "We've got to use all that experience to make sure we do it again."

United have six games remaining to extend their title record after rattling off an eighth successive league win.

Wayne Rooney scored the opener from the penalty spot after QPR captain Shaun Derry was sent off in the 15th minute for pushing over Ashley Young, although there was minimal contact and the United winger appeared to be offside.

There was no disputing Paul Scholes' 68th-minute goal, with a trademark drive blasted in the net.

"You have to get momentum at this stage of the season," Ferdinand said. "That's the most important thing, making sure you get a good run together and win all your remaining games. We've ticked one off today and hopefully we can keep on going."

The Red Devils have been calmness personified, even when City made top spot its own until its grip was loosened a month ago. There appears to be no way back now for Roberto Mancini's side, which has imploded amid internal strife.

The frustrated manager even criticised one of his own players, with petulant striker Mario Balotelli earning a stinging rebuke for his second dismissal of the season.

A dangerous-looking, knee-high tackle on Alex Song had gone unpunished after 10 minutes, but Balotelli was sent off in the 90th minute when he was booked again for a second lunge on Bacary Sagna.

Mancini says he wants the FA to investigate the foul on Song, which could lead to a lengthy ban. After a stamp on Tottenham's Scott Parker was missed by a referee in January, a four-match suspension was imposed on Balotelli by the Football Association.

"We have six games and he will not play in the next six games," Mancini said.

Asked if the Italy striker could be sold at the end of the season, his compatriot: "Probably - but I don't know."

"Every time, we risk one sent off, like today," Mancini added. "But he can score also in the last minute."

But the only goal of the game only ever looked like coming from Arsenal at Emirates Stadium. It came with three minutes remaining when Mikel Arteta blasted the ball from outside the penalty area inside goalkeeper Joe Hart's left post.

While City have won 15 of 16 home league matches and drawn the other, they have now lost five times on the road this season.

"It's clear now that it's very difficult," Mancini said of the title race. "In the end, if we don't win it's probably because they (United) did better than us."

Arsenal, meanwhile, are closer to securing their place in the Champions League having been closer to the relegation zone earlier in the season.

Arsene Wenger's side has a two-point cushion in third over Tottenham.

"Tottenham are still in there and it's going to be a big fight from here to the end of the season, but we knew that today was one of the more difficult games for us," Wenger said.