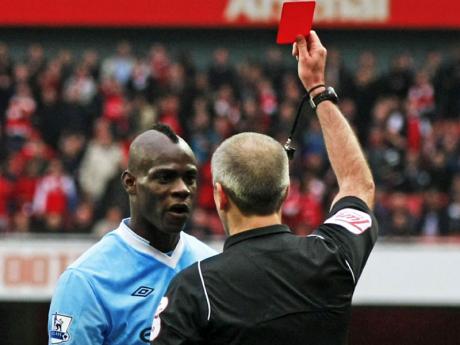 Manchester City's Mario Balotelli (left) is shown a red card by referee Martin Atkinson after being shown a second yellow card during their English Premier League match against Arsenal at the Emirates stadium, London, yesterday.- AP

Newcastle United strengthened their surprise Champions League push with a superb win at Swansea City thanks to another clinical Papiss Cisse double. The in-form Senegal striker cracked the Magpies into an early lead as he raced on to Yohan Cabaye's pass to fire past Swans keeper Michel Vorm from 20 yards. Swansea dominated possession but Newcastle penetrated as the same pair combined to seal a smash-and-grab win. And Cisse chipped Vorm from inside the box to secure a third successive brace.

Clint Dempsey's first-half double helped Fulham to a rare away success that ended relegation-threatened Bolton's three-game winning run. Fulham had the better of the first period and Dempsey opened the scoring with a curling, 30-yard free kick. The American added his second just before half time as he headed in Damien Duff's cross from the right. Fulham sealed the win when John Arne Riise's cross was steered in from eight yards by Mahamadou Diarra.

Juan Mata scored a stoppage-time winner to sink struggling Wigan and strengthen Chelsea's hopes of a top-four finish. Branislav Ivanovic was in an offside position when he put Chelsea ahead in controversial circumstances after a floated pass by Raul Meireles. Mohamed Diame appeared to have earned the visitors a priceless point when he netted from the edge of the area. But Chelsea secured victory through Mata after fellow Spaniard Fernando Torres hit the post.

Liverpool ended a run of three defeats as they drew with an Aston Villa side who had to settle for a point in their battle for top-flight safety. Villa went ahead when Chris Herd angled in a shot from Barry Bannan's cutback. Luis Suarez had two penalty claims waved away before Reds teammate Dirk Kuyt put a shot over from two yards. A Suarez header hit the post before he finally got the equaliser when Daniel Agger's header came off the crossbar and the Uruguyan nodded in.

Norwich City came from behind twice to hold Everton in an entertaining encounter at Carrow Road. Everton took the lead when Nikica Jelavic prodded home Phil Jagielka's cross, but Jonny Howson's side-footed finish levelled proceedings. Jelavic was in the right place again to convert Steven Pienaar's centre, although Norwich felt they should have had a free kick in the build-up. But Grant Holt made sure the spoils were shared with a close-range tap-in.

West Brom won for the first time in five matches to send Blackburn to their third defeat in a row and deeper into relegation trouble. Martin Olsson turned into his own net after West Brom's Gareth McAuley had headed Chris Brunt's ball across goal. A superb double-save by Ben Foster kept the scores level before Marc Antoine-Fortune drilled home at the far post. Liam Ridgewell headed in Graham Dorrans's free kick before Blackburn's Anthony Modeste was sent off late on.

Wolves' hopes of avoiding relegation from the Barclays Premier League suffered a serious blow as Stoke came from behind to win at the Britannia Stadium. Home keeper Asmir Begovic's error to let Michael Kightly's pass bounce past him and in to the net gave the visitors hope of snatching a vital victory. But the lead lasted just over 10 minutes as Robert Huth hammered Stoke level from inside the box. Peter Crouch's looping header consigned Wanderers to another damaging defeat.

Tottenham's hopes of a top-four Barclays Premier League finish remain in the balance after a goalless draw at Sunderland. In normal circumstances, a point at Martin O'Neill's resurgent side would be praiseworthy, but in Tottenham's position it represents a minor setback. Spurs began the game brightly, but the home side neutralised the match, resulting in few clear-cut chances. The best of them fell to Rafael van der Vaart, whose two goal-bound shots were blocked by Sunderland defenders.

Mikel Arteta's late strike gave Arsenal victory to leave Manchester City eight points behind Manchester United at the top of the Barclays Premier League. City lost Yaya Tour to an early injury and were lucky not to have striker Mario Balotelli sent off for a high lunge on Alex Song. Robin van Persie twice hit the woodwork and saw a strike ruled out for offside. Arteta did find a way through when he crashed in a 25-yard strike before Balotelli was shown a late red card.

Manchester United went eight points clear at the top of the Barclays Premier League after a controversial Wayne Rooney penalty helped them defeat QPR. Paul Scholes also scored from 25 yards as United secured an eighth straight league win, while Michael Carrick was denied by a post. QPR's Shaun Derry was harshly sent off for fouling Ashley Young, who was offside, before Rooney fired home. But United were the better side, 37 year-old Scholes sealing victory.