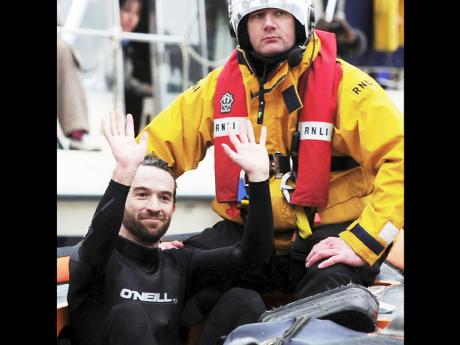 The swimmer that forced a delay in the boat race waves after he was taken from the water and taken away by the police during the 158th Boat Race between Cambridge University and Oxford University on the river Thames, London, last Saturday. Cambridge won a dramatic race following a 31-minute mid-race postponement after a man jumped into the River Thames and swam between the crews. -AP

LONDON (AP):Britain's Olympic chief fears the London Games could be marred by a protest like the one that disrupted the Boat Race between Oxford and Cambridge on the River Thames.

Trenton Oldfield jumped into the water and appeared to deliberately cross the path of the rowers halfway through the competition Saturday in a protest against elitism and privilege. He was arrested and later charged with a public order offence.

With less than four months until the Olympics, the Boat Race highlighted concerns about athlete safety at events where the public will line the route, including the rowing, open-water swimming, marathon and road cycling.

"It just takes, and is likely to be, one idiot," British Olympic Association chairman Colin Moynihan said yesterday. "It's not likely to be a well-orchestrated campaign through Twitter or websites. It is likely to be someone similar to the idiot yesterday who causes major disruption.

"That is why all the security measures need to be put in place to minimise the chance of that happening. You can never completely remove it, but you can do everything possible to protect the interests of the athletes by minimising it."

The British government reiterated that message to the public and athletes.

"We are working to a robust and comprehensive safety and security strategy," the Home Office said. "We want to reassure everyone that we will leave nothing to chance in our aim to deliver a games that London, the UK and the whole world will enjoy."

Moynihan, who sits on the board of the London Olympics organising committee, said that "every conceivable scenario" is being assessed.

"Both the police and security operations around all venues and athletes are being reviewed on a day-by-day basis," he told the BBC.

There was a fan intrusion during the marathon at the 2004 Athens Olympics. Vanderlei de Lima of Brazil was leading when shoved off the course by spectator Cornelius Horan, an Irish priest who was later defrocked. De Lima eventually finished third.

Moynihan said that unless events were sanitised by removing all crowds, the threat of a protest will never be removed.

But the former Olympic rowing silver medalist stressed that security operations for the games are not just focused on the July 27-August 12 London Games.

"You are talking about the pre-games training camps - these athletes will come well in advance and be based around the country," Moynihan said. "You've got the torch relay coming up, you've got the live sites and the public needs to be protected."