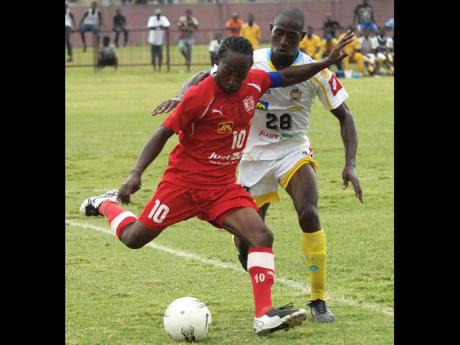 Late first-half substitute Anthony Bennett spurred life into the almost dreary encounter at Collie Smith Drive by whipping in a 55th-minute free-kick around Waterhouse's wall and past a diving Richard McCallum for a 1-0 victory.

The win moved second-place Boys' Town to 57 points, seven off Portmore who play Harbour View away at Compound tonight, starting at 9.

With five matches and maximum 15 points at stake in the fourth and final round of the league, Boys' Town are hoping Portmore's season goes into shambles and they maintain a perfect run to overhaul the runaway leaders.

Boys' Town coach Andrew Price, whose team was recording its first win of the season over Waterhouse, has described the remaining games as "must-wins".

"We are pretty confident we can turn around our fortunes," he recently said. "There is no real need to motivate the players, they know what is at stake, so it is just to go out there and get the job done."

The Red Brigade, however, have far more to do than just win games, they have to do so handsomely as Portmore have a healthy goal difference of 15, more than doubling the seven Price's team now enjoys.

"All season long we haven't been scoring a lot of goals and I believe once we get clinical in front of goal it will change our fortunes for the remainder of the season.

"We know that we really need to get people into the penalty box to actually convert those chances," the Boys' Town coach added.

However, if yesterday's encounter was anything to go by in which Waterhouse goalkeeper McCallum was only twice tested, Boys' Town will be chasing Portmore in vain.

With a sluggish-looking midfield manned by an overweight Oneil Thompson, Price's team will be playing for second or third money for the remaining four games of the season.

Meanwhile, Waterhouse, whose Donovan Duckie had all but conceded the impossible task of catching Portmore, describing it as "mathematically possible" and a "miracle for Portmore to lose the title", will be rallying his team to fight for scraps in the remaining matches of the season.

They could still nose out Boys' Town for second - even though they have fallen five points behind the second-place team.