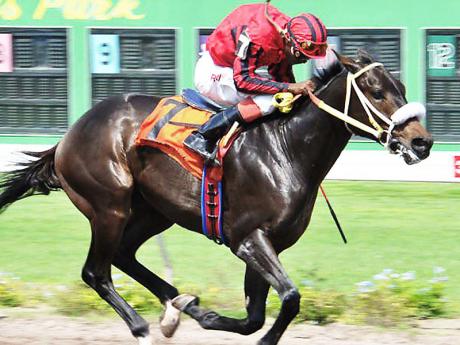 With the three-year-old fillies having had their day in the 1000 Guineas last Saturday, it's now the turn of the colts and geldings to match strides in the 2000 Guineas again over 1600 metres at Caymanas Park today.

The maximum 16 starters have been declared, the field including ante-post favourite ALL CORRECT, to be ridden by leading jockey Dane Nelson for champion trainer Wayne DaCosta.

Having won the $4.25 million Supreme Ventures Jamaica Two-Year-Old Stakes over the distance last Boxing Day to emerge the winter book favourite for the Guineas, ALL CORRECT looks a cinch to win the first leg of the Triple Crown.

Following his Boxing Day success, the stretch-running gelding by Storm Craft out of the Royal Minister mare Royal Pizzaz enhanced his status as the Guineas favourite by running a blinder against older horses in overnight allowance company on February 29.

He was beaten in a driving finish by last year's Governor's Cup winner ERASMO over 1500 metres. To my mind, that represented the best 'trial' by any of the three-year-old colts, including stable-companion ITALIANO, who won the official Guineas trial - the Prince Consort Stakes over 1400 metres on March 17.

Installed a 1-2 favourite for the overnight allowance race, ALL CORRECT raced prominently in third and actually looked beaten on the rails a furlong out, as ERASMO and ROLEX went on. Then, to the surprise of many, he was switched from the inside to the outside by Dane Nelson early in the last furlong, found a second wind and fairly flew on the wide outside to be beaten three-quarter lengths by ERASMO in the fairly good time of 1:33.2.

ALL CORRECT has been taken to task at exercise in preparation for today's race, looking real sharp in a 1:28.2 spin over seven-furlong on Saturday, March 31.

Leading jockey Dane Nelson, who had choice of rides as stable jockey, has deserted the Prince Consort and Sir Howard Stakes winner ITALIANO to ride ALL CORRECT, and rightly so.

notch or two ahead

In terms of class, ALL CORRECT is a notch or two ahead of the grey ITALIANO, who though improving this season, seems best served by a minor share with Andre Martin now offered the ride.