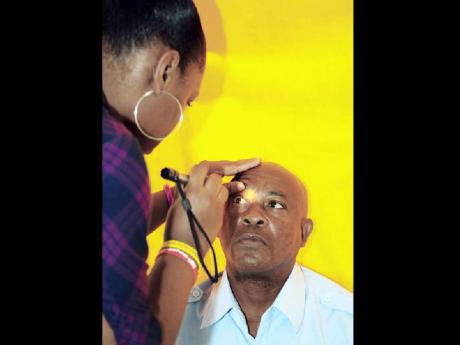 Errol Gordon gets his eyes examined by Anna-Gay Madden, of the Foundation for International Self Help (FISH), during a men's wellness extravaganza in Trench Town, St Andrew, yesterday hosted by the Kingston Restoration Company in association with the Citizen Security and Justice Programme. - Norman Grindley/Chief Photographer

The Kingston Restoration Company (KRC) and the Citizen Security and Justice Programme (CSJP) yesterday teamed up to bring the message of healthy lifestyles to inner-city men.

The entities hosted a Men's Wellness Extravaganza at the Trench Town Multi-purpose centre for residents from the Trench Town, Hannah Town and Denham Town communities. Organisers said they wanted men of the western Kingston communities to be seen in a different light, and for those men to take issues such as healthy living seriously. Approximately 200 men from CSJP Zone II were also pre-registered to take part in the extravaganza's clinic, which offered various check-ups. Men of various ages queued up for the various tests including blood pressure and cholesterol checks as well as the Prostate Specific Antigen test. Doctors from the May Pen Health Centre and the hospital were on hand to give one-on-one consultation free of cost.

Morin Seymour, executive director of the KRC, said the aim was to divert the attention of the men to a more positive direction, assisting them to achieve something in their lives.

Seymour said he was pleased with not only the turnout but the active participation of the men - from the eagerness to take the various tests to the healthy-meal cooking demonstrations.

He said the overall goal was for men to take leadership roles in building homes, better families and ultimately a better nation.

"There is also a direct correlation between eating well and doing well. So we want men to carry these lessons back to their households and families, especially their children," he explained. He also noted that wellness events of such a nature were rarely geared towards men.

Walker said the lifestyle was also in keeping with the company's aim to provide affordable meal solutions to Jamaicans.

Other activities yesterday included a domino tournament and concert.