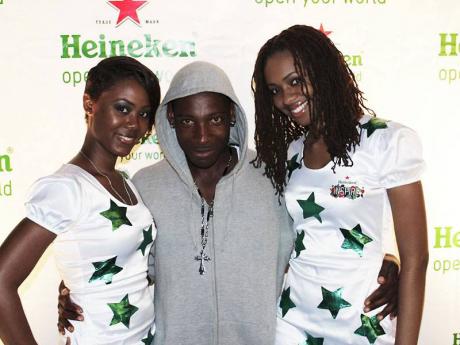 If you think you are super-talented and very creative in expressing yourself, then there is only one way to prove it! Pit your talent against some of the very best in the Heineken Inspired competition which is running until April 22. The competition was launched on March 9 on the lawns of Devon House in St Andrew, where patrons were totally wowed by the inspirational pieces that were on show to stimulate the creative juices. Since then, the competition has been generating a lot of excitement through its Facebook page and two Inspire Me Tours.

According to brand manager of Heineken, Nasha Douglas, the response to the competition has been great.

"We've been getting some really great entries," she said.

"When it comes to entrants expressing their creativity, be it in music, art, fashion or film, there is no shortage of ideas. But the category that seems to have entrants really fired up is film."

Douglas says there have been some really interesting entries, which will no doubt be adding to the difficulties the celebrity judges will have when it comes time to select the winner.

It's not too late for Heineken consumers to enter with a chance of winning a share of $1 million. There are three simple steps to enter.

2. Upload your entry to the Be Inspired Tab atfacebook.com/heineken. There are four categories - art, fashion, music and film.

3. Get as many of your friends to 'like' your piece as the most likes, in addition to the judges' decision, will determine the winner.

To rev up the contest, Heineken hosted two Inspire Me Tours - one at Devon House and the other in Junction, St Elizabeth.

"If the response and excitement of the first two are anything to go by, then the final Inspire Me Tour - slated to be held on April 20 at the Dump-Up Beach in Montego Bay, should be great!" Douglas said.

It is also at this final stop in the tour that the location for the grand finale event, set for April 28, will be announced. The winning pieces will be showcased at that grand finale.