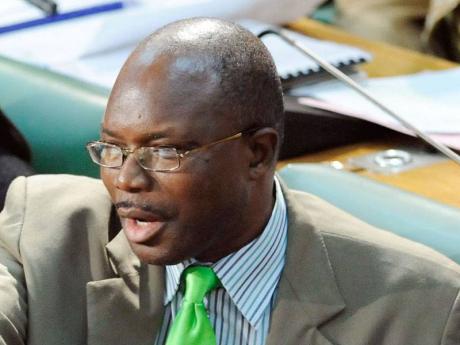 CONTROVERSIAL LEGISLATOR Everald Warmington yesterday declared that people should not seek to become members of parliament if they cannot fund their own elections.

"If you can't afford to finance elections, don't put yourself up as candidates," Warmington argued during yesterday's sitting of the House of Representatives.

The South West St Catherine representative was contributing to the debate on the Electoral Commission of Jamaica report on campaign financing.

"Finance your campaign. That should be a requirement. I finance my own campaign," Warmington said.

But first-time MP Lloyd B. Smith scoffed at Warmington's suggestion.

"I don't think that any well-thinking parliamentarian would agree with the proposal that a candidate should only use his or her personal funds during an election," Smith, the Central St James representative, said.

"That, I think, will be setting the stage for some very dangerous consequences, including the inclusion of undesirable persons with great wealth who could take over the political process," Smith added.

Warmington, who argued against state funding of elections for candidates, said people who have to seek contributions to become parliamentarians can become the pawns of their donors.

"I have never sought political contribution for any campaign that I have contested. I have never had fund-raising, I have never asked anybody to finance my campaign," he stressed.

"The person who can give you financial contribution are the people who can afford it - the guy up the top there. The little man who supports me in my constituency cannot afford to find contribution to give me."

He added: "If I collect financial contribution from the big man up there I am going to (be) beholden to that guy. He is going to tell me what I have to do for him and I must do when I am elected ... he can dictate to me," Warmington added.

And on the issue of state funding, he said that should not be encouraged.

"We should never burden the poor people of this country to finance our campaign," he added.

In its report, the ECJ said state funding might act as "a valuable tool in protecting political equality of opportunity and electoral competition, thus creating a level playing field by enabling new and small parties and persons of modest means to offer themselves as candidates and compete with parties or candidates who are dominant and, perhaps, are more financially viable."

Damion Crawford, representative for East Rural St Andrew, expressed reservations about the application of state financing, saying it should not be a subsidy.

"If it is that you still allow for the private persons to contribute, then it means that that influence would not have been negated and so the public financing would not have achieved the necessary realities if it is half and half.

"If we should go with any form of public contribution, it would have to be as an entirety, moreso than as a part," Crawford added.

The debate was concluded and the report approved by the House, but only after Leader of Government Business Phillip Paulwell agreed to amend the resolution which accompanied the report.

The amended resolution states that the ECJ will have to take into consideration the comments made by parliamentarians in the debate. Although several issues of concern were raised by MPs, the House adopted the ECJ report, preserving a convention not to amend reports sent by that body to the Parliament.

The ECJ has been asked to consider the comments and Paulwell, who has responsibility for electoral matters, will be guided by them in drafting campaign financing legislation.