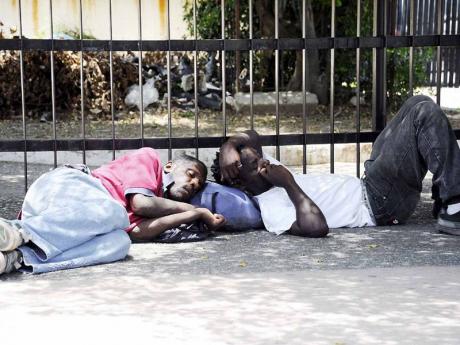 Homeless people on King Street in front of the Supreme Court. File 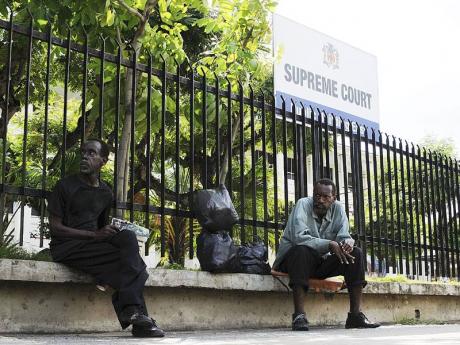 Homeless people on King Street in front of the Supreme Court. File
1
2

The stakeholders at a recent Gleaner Editors' Forum complained that the prevalence of street people and commercial garbage pick-up were two areas the authorities must clamp down on.

"It (the intrusion of street people) affects everybody. They (the authorities) just have to move them," said Faye Taylor, an informal commercial importer. "And it's getting bigger. You have people live out there like they're in their bedroom."

She acknowledged that not all of them were of unsound mind, but added that the deportees whose families refused to take them in were adding to the numbers. Bernard Williams of Care Furniture Limited, pointed to the proposed homeless shelter on King Street that has been talked about for years.

"That place has deteriorated so if they are going to fix it, it is going to cost 10 times the amount to really get that place going," he said. "It's not a matter that the plans are not there ... they are not being implemented!" he said.

Adding to the overall uncleanliness

Charles Williams of Williams Furniture and Fixtures, lamented that street people are taking over buildings that are unsupervised by their owners, adding to the overall uncleanliness of the area.

"They patch them up with any little thing that they have and you can imagine you have your nice place and a guy comes beside you with that? The city is just loose! It's every man for himself," he wailed. "What affect them (vendors in other areas), doesn't affect us (his business is on East Queens Street), because we take control of our area."

The group also explained that some business operators pay handcart men to dump their garbage in lanes at night, because neither the KSAC nor the National Solid Waste Management Authority is responsible for commercial garbage pick-ups.

"They take the 'coke heads' to carry it around the lane where we are. We have to be warring to keep our lane clean," lamented Taylor. Her colleague Brenda Christie pointed out that there are many cookshops in their section so there is always rubbish. The women said they keep the area clean by ensuring their garbage is kept secure and by chasing away the 'coke heads' who rummage through the garbage.

Work out a strategy

Jacqueline Cole, president of the Customs Brokers and Freight Forwarders Association suggested that small businesses needed to come together and work out a strategy.

"Otherwise ... you're always going to have people dumping just about anywhere," she said. They compared downtown to Rae Town in Central Kingston, which is perennially clean even after their customary Sunday night party.

"You don't even see a piece of paper. Down there they clean it up. Those people take charge of down there," said Taylor. Bernard Williams felt that the authorities only react when issues are raised in the media and that even if the KSAC isn't responsible for pick-up, they could monitor those who do more effectively.

"The law is there. It is just a matter of maintaining it. Monitor the thing," he said. The group said they were tired of the talk and wanted action.

"They have so many plans for downtown, but few of them have been implemented. I hope these new ones that we are hearing about will take a turn," said Williams.

Clean-up of downtown, Kingston, means getting the homeless off the street, business people say.