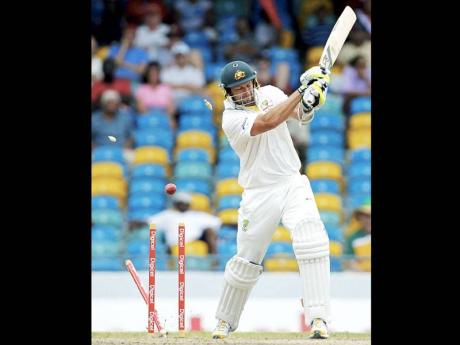 West Indies lost the plot in a disastrous 25-minute period before tea on the fourth day here yesterday, to leave the opening Test against Australia teetering on a knife's edge heading into today's final day at Kensington Oval.

Left to negotiate a tricky period after Australia declared their first innings at 406 for nine, 53 minutes after lunch, West Indies capitulated in the space of 26 balls to stumble to tea at four runs for three wickets.

Seamer Ben Hilfenhaus, who finished with three for 17, took all three scalps without conceding a run, off just 14 balls.

West Indies made somewhat of a recovery to reach the close on 71 for five, just 114 runs ahead, setting up the final day for a fascinating climax.

Narsingh Deonarine, recalled for this match after two years out of the side, will carry the Windies' hopes after ending the day unbeaten on 20. He has so far faced 94 balls in an innings that has consumed 134 minutes and has not included a boundary.

Wicketkeeper/batsman Carlton Baugh was with him on two.

Deonarine had earlier combined with elegant left-hander Darren Bravo to repair the damage after tea, adding an even 50 for the fifth wicket.

Bravo, unflappable in his approach, top-scored with 32 before edging a delivery of little merit behind, off fast bowler Peter Siddle, 17 minutes before the close. He faced 78 balls in 145 minutes and counted three fours.

Taking a lead of 43 following Australia's declaration, the Windies failed to capitalise.

Barath played all over and around one and was bowled off-stump for two with the third ball of the third over of the innings and two balls later, opener Kraigg Brathwaite went caught behind without scoring, wafting at a wide ball in a rare moment of indiscretion.

Kirk Edwards, who survived a scare when Ricky Ponting almost took him at second slip off a low, sharp chance, then walked across his wicket and was palpably lbw for one, though he referred the decision.

Veteran left-hander Shiv Chanderpaul joined Bravo in an attempt to stop the haemorrhaging, but the rescue effort failed after just 13 runs, when Chanderpaul edged one behind off pacer Ryan Harris for 12.

Bravo and Deonarine set about solving the crisis and appeared set to carry the Windies to the close without further loss when a lapse in concentration saw Bravo flirt with a Siddle delivery.

Earlier, West Indies made quick inroads into Australia's batting in the morning session, but a stubborn last-wicket stand of 77 between Ryan Harris and Nathan Lyon frustrated them and undermined their advantage.

Harris finished unbeaten on 68, his maiden Test half-century, which included seven fours and spanned 123 balls and 209 minutes, while Lyon made a Test-best 40 with six fours off 89 balls in 104 minutes.

Fast bowler Kemar Roach, who finished with three for 72 overall, snared two for 16 from 12 overs in the pre-lunch session, while Fidel Edwards (2-92) took two for 43 from a 13-over spell. Darren Sammy took two for 65.

With the Aussies resuming the day on 248 for five in pursuit of the hosts' 449 for nine declared, West Indies wasted little time in making the early breakthrough when Mike Hussey edged a drive at Roach in the day's fourth over to be caught behind by Baugh, after adding just one to his overnight 47 with the Aussies on 249 for six.

In the next over with one run added, Peter Siddle fended a short ball from Fidel Edwards to Kirk Edwards at gully to fall without scoring, while Matthew Wade's 97-ball sojourn over 28 ended when Darren Bravo gobbled up an edge at second slip, also off Edwards, as Australia slipped to 285 for eight.

However, Harris posted 44 for the ninth wicket with Ben Hilfenhaus, who scored a lively 24 from 29 balls with five fours before his middle stump was removed by Roach.

Harris and Lyon then proved resolute and not even the half-hour extension in play past the scheduled 12 p.m. mark could help the Windies break the partnership.