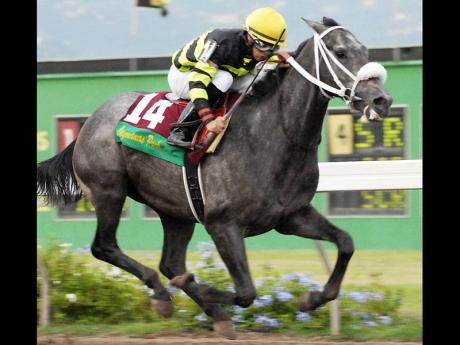 UNCLE DONNY, with Dick Cardenas aboard, powering to a two-length victory in Monday's 2000 Guineas at Caymanas Park. - Colin Hamilton/Freelance photographer

Top-line trainer Anthony 'Baba' Nunes has hailed the victory of UNCLE DONNY in the 38th running of the 2000 Guineas over 1600 metres at Caymanas Park on Monday, saying the win augurs well for the remaining classics of the season.

Looking ahead, the second generation trainer is confident that the 3-y-o grey colt by Dayton Flyer out of the Royal Minister mare Pretty Hilly will get further, which should enhance his Triple Crown prospects.

"He will definitely get further if you look at the dam (mother) side of his pedigree," insisted the second-generation trainer, who had previously won the 2000 Guineas with TERREMOTO in 1998 and ROYAL IMAGE in 2008.

"The win came as no surprise... He had been working particularly well going into the Guineas, had looked improved since finishing third to Italiano in the recent Prince Consort Stakes (trial) and simply delivered when it mattered," he added.

"He got a perfect draw and a perfect ride ... . Coming on the heels of our near miss with Star Flyer against the outsider She's Traditional in the 1000 Guineas on Saturday, this was more than welcomed.

"He's at a stage of rapid improvement and we have high hopes for him as the Triple Crown series unfold."

Cardenas, on the other hand, was happy to atone for Saturday's disappointment aboard STAR FLYER, saying UNCLE DONNY was prepared to run the race of his life and delivered.

"My aim was to hold good position in race from early and come through on entering straight," said the 27-year-old Panamanian, whose native language is Spanish.

"He a very nice horse who please trainer at exercise in preparation for race ... I know he have good chance and looking ahead Uncle Donny will stay further," he assessed.

Cardenas won the 2000 Guineas aboard the Richard Azan-trained MARK MY WORD, both going on to complete the Triple Crown in 2010.

Former government minister, Don Wehby, who co-owns UNCLE DONNY with his father Don Wehby Sr (Oakridge Farms), was elated to have won the colts classic as both owner and breeder.

"This win is very special to me ... My father and I really love the sport and it is always good to win on the big occasions.

"Back in 2007 I finished second with Rio Infinito to the outsider Lady T in the 1000 Guineas and to take it a step further with Uncle Donny today is something else," said Wehby, owner of the dam Pretty Hilly, who in 2010 conceived UNCLE DONNY at the Argyll Farms in St Mary.