'We must maintain integrity of league' 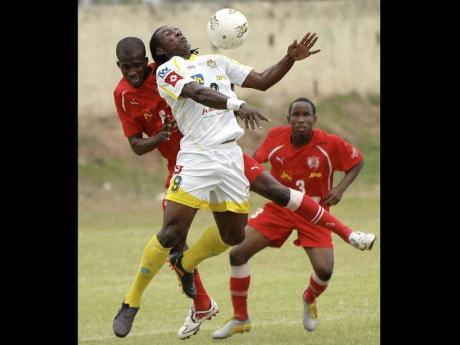 Waterhouse striker Jermaine Anderson (centre) controls the ball on his chest as he is challenged from behind by Boys' Town's central defender Carlos Wright, while another Boys' Town defender, Hugh Evans, looks on, during the Red Stripe Premier League football match at Collie Smith Drive on Sunday. Boys' Town won 1-0. - Ian Allen/Photographer

Harbour View Football Club are not contenders for the 2011/2012 Red Stripe Premier League (RSPL) championship title, but no team will get an easy passage when they play them.

That was the message coming from coach Donovan Hayles following Harbour View's 1-1 draw with overwhelming title favourites Portmore United, when both teams met at the Harbour View Stadium on Monday night.

Portmore United remain at the top of the table on 65 points, eight more than Boys' Town, with four games to go, while Harbour View increased their tally to 45 points and remain the sixth-placed team based on the format of the competition.

"It (our committed approach to the game) is not just about Portmore. Whenever Harbour View step out on the field we want to give a good account of ourselves," Hayles said after Jermie Lynch scored in the 45th minute to cancel out Alanzo Adlam's 32nd minute opener.

While he was generally pleased with the approach of his charges, Hayles was a bit disappointed with the outcome.

"I am disappointed because we wanted to win all five games (in the fourth round)," the former national goalkeeper said.

"We will continue to play and lift ourselves, especially looking at the coming season. We are not just playing for this season, we are playing to get back into it. This is an unusual position for us not to be in contention to win the championship, but we have to maintain the mentality which is to win at all times and perform and know that we are among the best," he declared, adding that the future of the club is very bright with youngsters such as Lynch.

"I am more than happy with how the team performed tonight, knowing that we played a very very young team. We had players' playing for the first time tonight. We had seven under-21 players on the field tonight so it is a good showing for us," said Lewis, who had national under-17 player, Alvas Powell, partnering Rickardo Harriot in central defence and national under-20 player, Paul Wilson, operating in midfield.

"It (the result) is positive for the club. We wanted three points, but we are very much happy with a point," he added, noting that senior players such as Eric Vernan and Adrian Reid were out with injuries.

The fact that they still have not managed to get the better of Harbour View all season was of no major concern to Lewis.

"There will always be a team that gives you problems throughout the season and this is the first game in the top six, we have not beaten Harbour View all season so coming here and getting a point is more than good for us," he declared.

With their next match being a home assignment against Tivoli Gardens, Lewis hinted that they will be more adventurous.

"We play Tivoli next at home so we can play more open there," said the man who guided Highgate United to the RSPL.