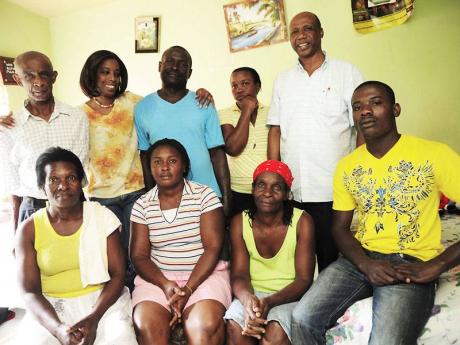 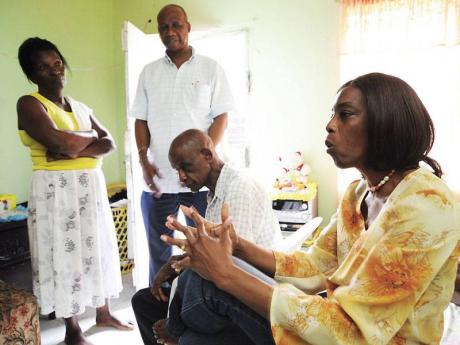 Justices of the Peace Coreen Dennis (right), Winston G. Williams (second right) and Lebert Halliman speak with Claire Williams (left) as part of their efforts to resolve a 10-year family feud in the Williams family of Fern Hill in Unity, St Andrew. 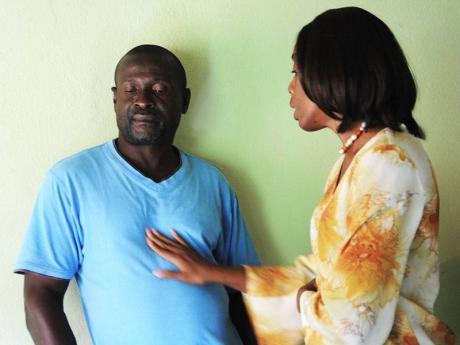 For the past 10 years, the Williams family has been embroiled in a dangerous family feud that has seen them carrying out heinous acts against each other, with a growing hatred that seems to be spiralling out of control.

In fact, it could be safe to say this family doesn't need any outside enemies. They are doing quite fine on their own destroying each other, physically and mentally.

The long-standing internal war is so deeply rooted, it now spans three generations and it doesn't appear to be close to a resolution.

More than 60 years ago, David and Alice Williams acquired one and a quarter acres of a deep, rugged, sloping valley property, nestled in the hills of Fern Hill district, Unity, in rural St Andrew.

In 2001, when the parents died, the children inherited the property and each mapped out a part of the land for themselves and began to build their own home.

But the unity of the once close-knit family began to unravel in 2002 over the matter of Cherry's daughter, Michelle Phipps, wanting to cut a pathway down to where she wanted to build her home.

One family member vehemently objected to Michelle cutting the pathway, taking action to prevent it. Depending on who you asked, her grounds for objecting were any of a number of reasons.

Michelle got to cut the pathway, but that was the beginning of the enmity that continued to escalate to dangerous, outrageous levels.

Headley, Cherry, Harry, Linton and Mavis walked away from it, each deciding to make a home for themselves somewhere else.

What would seem strange to some has become the norm for this family.

Machete attacks; stonings of individuals and their homes; attacking each other's children; destruction of each other's property, including crops; gathering of faecal matter in plastic bags and throwing it across each other's property; throwing used sanitary napkins on each other's roofs, leaving them to soak into the rainwater they catch for usage; non-stop cursing and calling each other the most derogatory names "from mawning 'til night"; slandering each other in public, sometimes over a loudspeaker for the rest of the community to hear; malice - several of them don't speak to each other and they have banned their children and grandchildren from having any form of interaction or communication with each other.

This is all part of the daily life of the Williams family.

See the continuation of story in 'Enough is Enough'