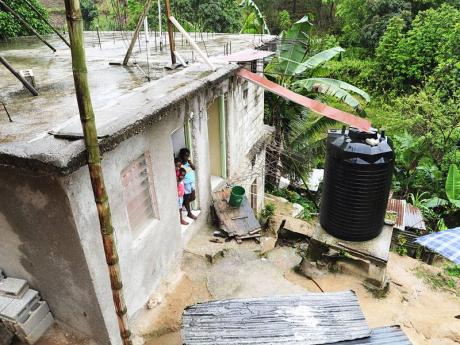 One of the homes on the Williams family property in Fern Hill district in rural St Andrew. - Photos by Ricardo Makyn/Staff Photographer 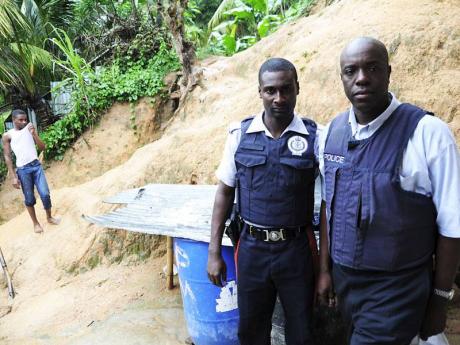 District Constables Noel Davis and Orrett Hardy (right) from the Lawrence Tavern Police Station at the property of the Williams family in Fern Hill district in Unity, rural St Andrew.
1
2

This is a continuation from the story 'Family Feud'

Over the years, the Williams family has kept the Lawrence Tavern police quite busy, having to make countless trips to the property to quell one quarrel or another, following the endless complaints being lodged.

With the burden that this family feud has been placing on the justice system, the authorities decided that enough was enough. They had to get to the bottom of it and try to bring an end to it once and for all.

Looking down into the valley at the property, it was unclear what would cause so much hatred among one family.

Dotting the sloping property were eight concrete homes - each with a farming plot - that houses the now 35 family members spanning three generations.

The fertile property was bursting with numerous crops and fruit trees of all kinds, in addition to chicken coops, pig and goat pens, while a few cows lazed around.

It was also unclear how they found the energy to keep up with this long-standing feud, as it took a serious level of skill and energy to navigate the treacherous terrain from one home to the next. The pouring rain only added to the slippery peril.

Gathered inside Michelle's home, the family members who were willing to participate in the dispute-resolution session unburdened the many issues that have been fuelling the feud.

"I literally live in fear and terror ... ," Sharon passionately stated, pointing an accusatory finger at one relative's children.

After a resounding agreement from other family members, she repeated that statement several times.

They began to recount the many times one of that relative's children, who was not there for the meeting, inflicted wounds on them. He was accused of chopping his uncle Stanford on different parts of his body, chopping cousin Michelle on her right arm, attempting to strangle his 15-year-old cousin. And the list goes on.

His mother denied that her son did any of the things he stood accused of.

"Then why him spend six months in jail?" Stanford asked her.

Even that the mother denied knowledge of, to the amazement of everyone else.

Charges and countercharges began flying all around the room, creating a head-spinning whirlwind at the incredibility of what they accused each other of. Each person was pointing fingers at the other, deferring the blame. Everyone had a different recollection of who did what and who were the troublemakers. All had selective memories.

At the end of a four-and-a-half-hour attempt at a resolution, it was doubtful if that was even possible.

It was clear some wanted a truce to put an end to it once and for all. Some wanted the family to return to live in peace, love and unity once again. Others just wanted to be left alone to live in peace, without having anything to do with the other family members. Others were adamant that there was no end to this. Some have admitted they have no love for other members of the family and that the hurt was too deep to forgive and forget.

"Mi can't deal with it nuh more. Mi want us live loving as a family. Mi want it finish, me tired of it!" exclaimed Michelle.

At the insistence of JPs Halliman and Dennis, they made a feeble pledge to try to live as a family in peace and do away with the acts of cruelty against each other.