Recognise downtown Kingston as a gem 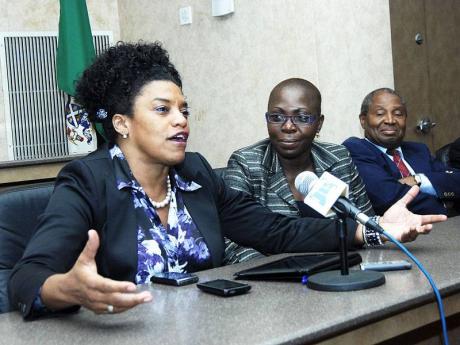 Restaurateur Jacqui Tyson (left) represents the Kingston business community during a press conference to launch the 140th anniversary celebrations of Kingston as the nation's capital. Looking on are Joylene Griffiths-Irving of Scotiabank and Morin Seymour, chairman of the Kingston Restoration Company. - Ian Allen/Photographer

WITH PLANS to stage a major food festival in Kingston during Heritage Week in October, one popular restaurant operator is working feverishly to change the mindset of some Jamaicans about downtown Kingston.

Restaurateur Jacqui Tyson says the festival is designed for everyone in the city, from the small vendor at Coronation Market to the large businessman.

It is being proposed that booths be set up in the downtown area, with the closure of some streets to accommodate day and night events.

"For you to have a stall, you must be downtown," Tyson explained.

"It is my wish to have a full festival. It will involve the spirit of our island, the spirit of our people - our music, sound, visuals - and make downtown a complete walkthrough area with tents and purveyors, and music and food and be a celebratory moment," she said.

"I want to say to the rest of Kingston and the world, downtown is where it's at, things will be great when you go downtown."

Tyson was making a presentation yesterday during a press conference to launch activities to mark the 140th anniversary of Kingston as the nation's capital. The ceremony was held at the offices of the Kingston and St Andrew Corporation.

The restaurant operator, who is the resident concessionaire at the Jamaica Conference Centre, said her greatest joy was to service her clients in downtown.

Tyson wants some Jamaicans to erase the negative mindset they have about downtown and to see the city as "a gem, a marketing tool and a highlight for Kingston and its environs".