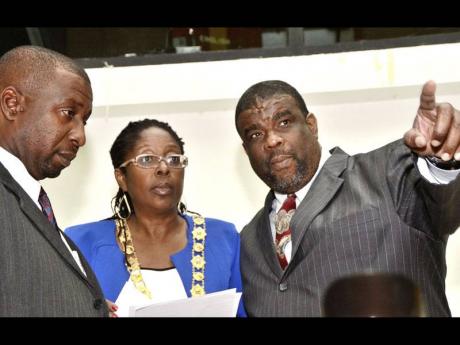 RODENT CONTROL and the care of Jamaica's children are two of the major issues Kingston Mayor Angela Brown Burke is hoping to tackle early in her administration.

Speaking during Tuesday's Kingston and St Andrew Corporation (KSAC) meeting at the Jamaica Conference Centre in downtown Kingston, Brown Burke said she was planning to meet with the Public Health Department and the National Solid Waste Management Authority to tackle the rodent issue. She also expressed shock at reports of physical and sexual abuse regarding children.

"I want us as a council and as councillors to bear in mind the state of our children, the state of parental care," Brown Burke said. "Where is the village that is supposed to be raising our children?"

The mayor said there were plans to meet with the Child Development Agency to see how, as a council, to place the issue of caring for children on the agenda. She also asked that councillors make themselves more accessible to their communities.

"In helping you do that, the KSAC will be establishing an email address for all 40 councillors. That will allow your residents in your communities to contact you. I ask you that you make it known that you answer mail that comes to you, that you keep in touch," she said.

Brown Burke said there would be a minimum budget for each division and asked the councillors to plan effectively with their residents to best utilise the funds. She also noted that there would be increased coverage of council meetings, "so that our citizens can see us at work, determine for themselves whether or not we are doing a good job".

She said work contacts for all councillors would be posted on the KSAC website.

Meanwhile, the empty chairs in one section of the conference centre told another story, as Jamaica Labour Party councillors were nowhere in sight.

Their decision to boycott the swearing-in ceremony, which took place during the council meeting, was evident, and Brown Burke took the first part of her presentation to address the matter. She outlined that discussions about the meeting began at the same time as those for the swearing in of the mayor and deputy mayor.

"I have acknowledged that a more formal approach could have and should have taken place as it relates to the change of venue," she said, but said she was still amazed by the 'brouhaha' that had erupted.

"I believe that there are far more important issues that we need to address as a council," she said. "No rules or procedures have been breached. There was never any intention to discriminate." She pointed out that she had been advised that councillors not sworn in Tuesday would have to do so at the next regular sitting in May.