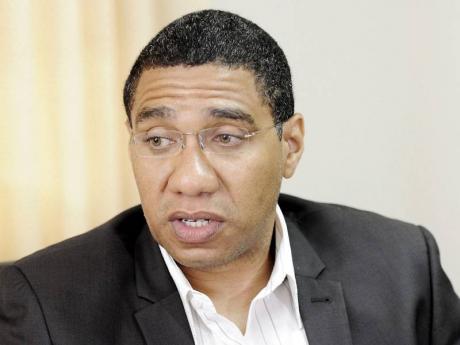 JAMAICA LABOUR Party (JLP) leader Andrew Holness on Tuesday backed the decision of its councillors to boycott the swearing-in ceremony for municipal representatives to serve the Kingston and St Andrew Corporation (KSAC).

During a tour downtown on Tuesday, the JLP leader said the councillors should not subject themselves to the poor behaviour that has characterised some of the swearing-in ceremonies for councillors who contested the recent local government elections.

"The councillors brought a particular concern, the whole business of consultation in such an important move. I don't recall in recent history where the swearing in of councillors has been done outside the municipal building. Such a move would be tantamount to swearing in MPs outside Gordon House," JLP leader Andrew Holness said.

According to him, a worrying trend appears to be in the making where civic ceremonies such as swearing-in ceremonies have been politicised.

Former mayor, now Member of Parliament Desmond McKenzie, said he was in full support of the councillors' action.

"I am in total agreement with the position taken by the councillors. I think the matter was handled in a very poor way, it detracts from the kind of open relationship that we had when we had control of the KSAC, where we sat down and had discussions on just about almost every issue that occurred at the KSAC," said McKenzie.

"It is unfortunate that the matter was handled that way, but the commitment that was given by the JLP to support the new administration still stands. However, on this particular issue, the councillors had to take a stand and it is a stand that is endorsed by myself and the party," McKenzie said.

The JLP councillors refused to attend the ceremony which was held at the Jamaica Conference Centre instead of the KSAC. The councillors, led by minority leader Toscha Schwapp (Norbrook division) first raised objections claiming that councillors in the People's National Party-dominated chamber were invited to bring 10 supporters to the ceremony. She said the 14 JLP councillors were not afforded the same courtesy.

It was revealed that the courtesy was a long-standing practice.

The JLP councillors raised objections about the venue, saying there was no need for it to be held outside the KSAC chamber.