'Improve what we grow' 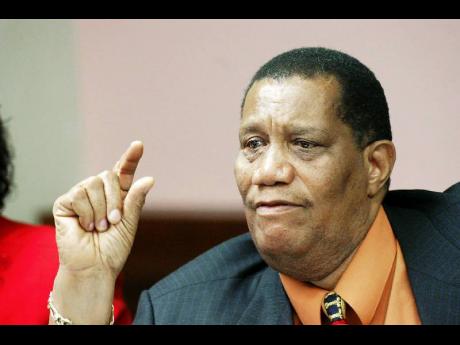 DESCRIBING THE situation as being at a critical juncture, Minister of Agriculture and Fisheries Roger Clarke has called for an overhaul of the industry to include innovative approaches to guarantee the country's food security.

"We are at crunch time, ladies and gentlemen, and it cannot be business as usual. We have to change our approach," Clarke declared. "We have to invest in ourselves and not rely on others to do so. We have to begin to change our agricultural practices to gain efficiencies."

The minister was addressing the Montpelier Agricultural, Industrial and Food Show in St James on Easter Monday. The event, which is in its 27th year, featured activities and displays from 13 groups of the St James Association of Branch Societies, as well as educational institutions and other corporate entities.

Clarke said a critical component of the paradigm shift was consumer groups who can support the industry by buying local agricultural produce. This buy-in, he explained, will help lower the country's food-import bill, which currently stands at more than US$800 million.

"There is much to be done, but it won't happen overnight. It requires all of us, of whatever colour, to work with each other."

The minister noted that despite climatic and economic challenges, the agricultural sector still presents opportunities for sustainable job creation.

"Our traditional crops - cocoa, banana, coffee and sugar, to name a few - have put Jamaica on the map, and although our production levels aren't where they used to be, the opportunity for revitalisation and expansion are strong," he explained.

"The export of yam, which is our major non-traditional crop, was valued at J$1.65 billion. Our ginger and turmeric have been scientifically proven to be the best, and even though we have started to produce more, we are only able to supply a fraction of the demand."

In his greetings, president of the Jamaica Agricultural Society, Montego Bay's Mayor Glendon Harris, lauded the efforts of St James farmers to improve their production output.

"The farmers of St James have shown significant increases in their cultivation, (and) production of various crops and animals," said Harris.

'There is much to be done, but it won't happen overnight. It requires all of us, of whatever colour, to work with each other.'