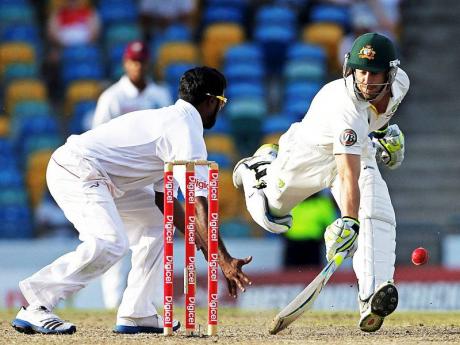 Australia's Matthew Wade (right) makes his grounds as West Indies' Narsingh Deonarine gets set to catch the return in a run-out attempt during the second innings on the final day of the first cricket Test match in Bridgetown, Barbados, yesterday. - AP

A gritty West Indies again fought valiantly, but paid the price for one wretched session in the entire opening Test and plunged to a three-wicket defeat to Australia late on the fifth and final day at Kensington Oval yesterday.

Not even a four-wicket haul by part-time off-spinner Narsingh Deonarine could save them as Australia, set 192 for victory in the last two sessions, reached their target at 5:43 p.m. with 14 overs remaining, to take a 1-0 lead in the three-Test series.

Shane Watson top-scored with 53, while opener Ed Cowan got 34 and Mike Hussey 32, but Australia suffered some anxious moments after Deonarine claimed Test-best figures of four for 53 to trigger a collapse.

Cruising at 106 for one in the last session, the visitors lost four wickets for 34 runs in the space of 32 minutes, to slip to 140 for five.

However, Hussey and Matthew Wade, who scored 18, added a crucial 37 for the sixth wicket to put the Aussies in sight of victory.

Fast bowler Kemar Roach, who finished with two for 45, removed both batsmen in successive overs to inject more tension into the contest, but the Aussies held their nerves to get home safely.

West Indies were left needing a miracle to save the opening game after they were dismissed for 148 in their second innings at lunch following an extended morning session.

Resuming the day on 71 for five after losing three wickets for four runs before tea on the fourth day on Tuesday, the Windies found no heroes as their last five wickets fell for 77 runs.

Tail-ender Roach struck a patient 25, while Carlton Baugh made 24, but Australia's seamers easily ran through the Windies lower order.

Ryan Harris grabbed two wickets for 17 runs in a four-over spell to finish with three for 31, while Peter Siddle took one for 18 from an eight-over stint, as he ended with two 32.

Ben Hilfenhaus, who engineered the Windies collapse on Tuesday, finished with four for 27.

Any hopes of West Indies staging a fightback were ended as early as the third over of the day when Deonarine played back to one from Harris that straightened and was lbw with just one run added to his overnight 20, to leave the Windies 75 for six.

Baugh and captain Darren Sammy temporarily raised the regional side's hopes with a sixth-wicket stand of 31, which consumed 44 minutes and pushed the score past the 100-run mark.

Baugh struck two fours off 47 balls in 95 minutes at the crease, while Sammy had a similar boundary count off 34 balls and 44 minutes.

Sammy's knock ended in misfortune when he accidentally kicked the ball on to his stumps, trying to avoid playing on off Watson, and Baugh followed 15 minutes afterwards, lazily chipping Hilfenhaus to Harris at mid-on.

Fidel Edwards skied Siddle to Watson running around from mid-off, but Roach played responsibly in a 23-run last-wicket stand with Devendra Bishoo (seven not out) that saw the extra half-hour of play taken.

Dropped at 10 by Michael Clarke at slip off off-spinner Nathan Lyon at 128 for nine, Roach put his head down to hit one four off 47 balls in 80 minutes at the crease.

Man of the Match: Ryan Harris.