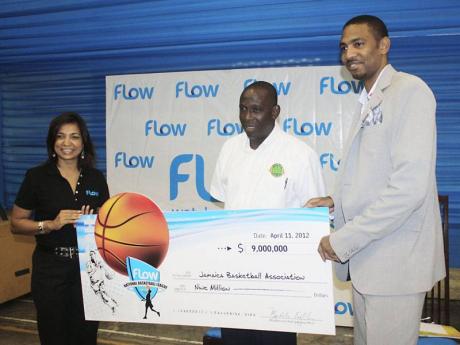 Telecommunications Company Flow reaffirmed its sponsorship of the National Basketball League (NBL), when they handed over a sponsorship cheque valued at $9 million to the Jamaica Basketball Association (JaBA).

Denise Williams, director, corporate and government affairs, Flow, which is sponsoring the league for the third consecutive year, presented her company's cheque to Ajani Williams, president of the JaBA, during a press launch at the University of Technology (UTech) auditorium yesterday.

"We are committed to working with JaBA to improve and promote this growing sport as Jamaica establishes itself in line with other international leagues," said Williams.

"We are happy to help promote the sport across the island and create more avenues for exposure through our technology, whether it is through Flow TV or on the Internet," she said.

Williams added that this year's competition will look to outdo the 2009 and 2011 seasons and give local fans, sports lovers and the entire family the chance to watch the developing game either at home on TV or at the match venues.

"Sports is a sound avenue for learning economic opportunities for Flow. The focus is on youth, and engaging youth is one of our sound pillows of development and we were very happy to come on board for the third year," Williams said.

Ajani Williams said he was very delighted for the sponsorships and support from corporate Jamaica in helping with the development of basketball across the country.

"It's lovely," Ajani Williams said. "We are just really happy that we have a three-year deal with Flow. We are also happy for the efforts that they have put into this year's competition, and I know that this is going to be one of the best years for basketball in this country."

He added: "The Jamaica Basketball Association is thrilled that Flow, providing fast Internet services and high-quality cable programming, would help satisfy and unlock the local demand for basketball in Jamaica and the growing appetite for local quality content."

The competition is set to tip off next Saturday at the UTech auditorium, with Eastern Pistons battling Spanish Town Spartans, while the second game will be a repeat of last year's final between defending champions Tivoli Gardens All Stars and Majesty Gardens.

The competition, to run for four months, will see matches being played at the Edgewater Courts, National Stadium, University of the West Indies, Montego Bay Cricket Club, Folly Oval in Portland, and the Morant Bay court by the sea.